In February of 2018 I attended a talk given by Sister Helen Prejean at Cathedral Catholic High School. It was pretty great.

What I took away from it was her extraordinary and matter-of-fact way of speaking about something very difficult. That vengeance is ultimately useless. Political truths about the misapplication of the death penalty on nonwhite people and on the poor. And all in a very practical tone.

I found her inspiring. 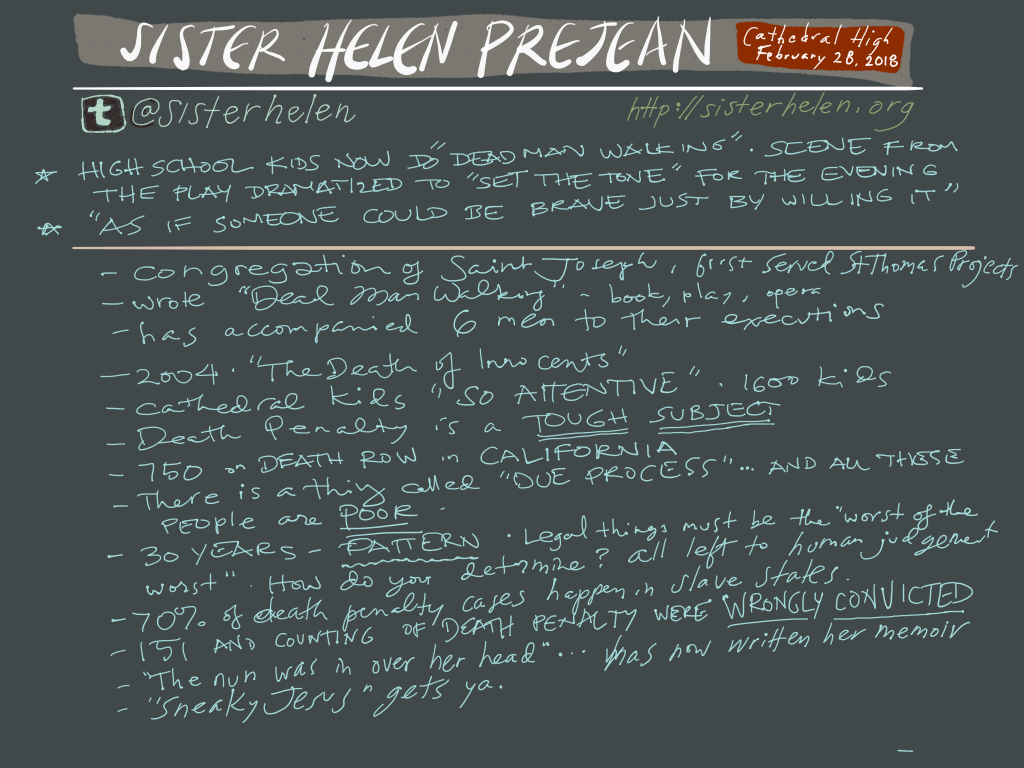 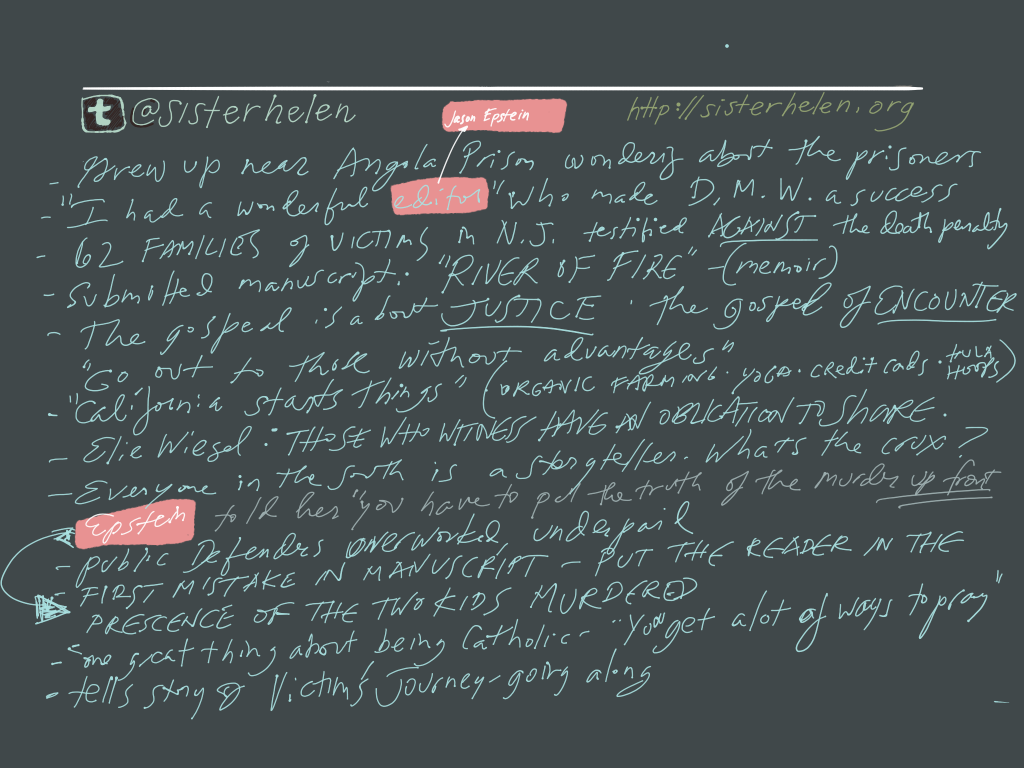 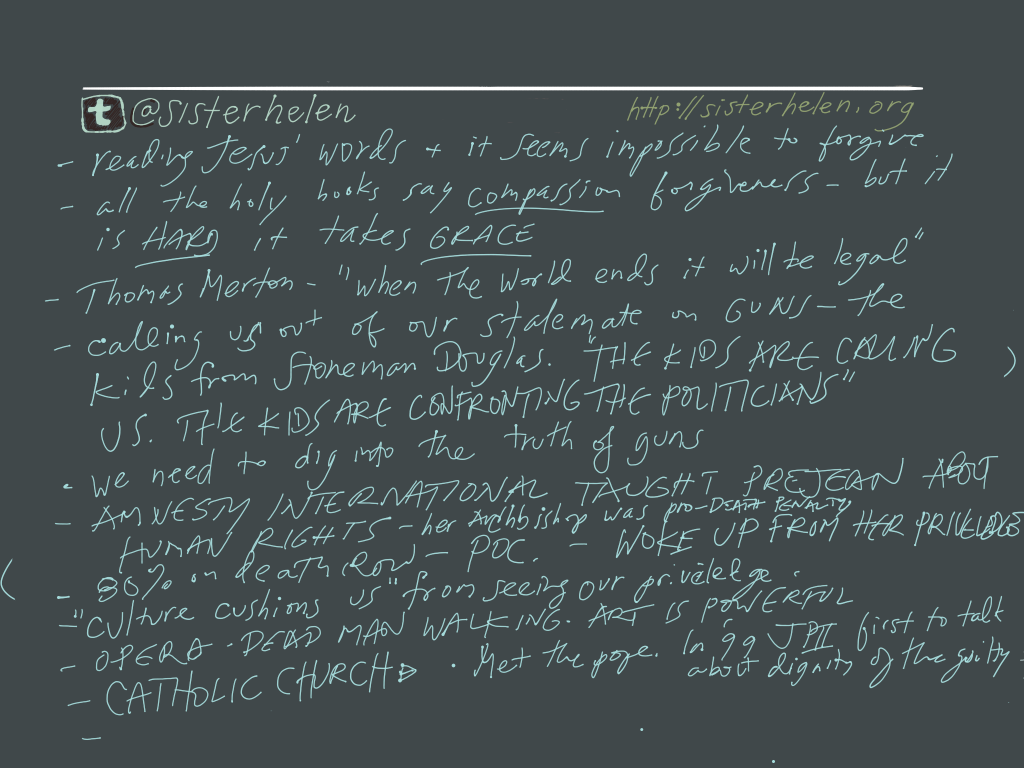 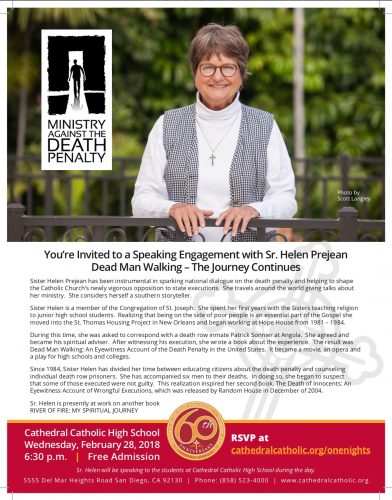 Sister Helen Prejean has been instrumental in sparking national dialogue on the death penalty and helping to shape the Catholic Church’s newly vigorous opposition to state executions. She travels around the world giving talks about her ministry. She considers herself a southern storyteller.
Sister Helen is a member of the Congregation of St. Joseph. She spent her first years with the Sisters teaching religion to junior high school students. Realizing that being on the side of poor people is an essential part of the Gospel she moved into the St. Thomas Housing Project in New Orleans and began working at Hope House from 1981 – 1984.
During this time, she was asked to correspond with a death row inmate Patrick Sonnier at Angola. She agreed and became his spiritual adviser. After witnessing his execution, she wrote a book about the experience. The result was Dead Man Walking: An Eyewitness Account of the Death Penalty in the United States. It became a movie, an opera and a play for high schools and colleges.
Since 1984, Sister Helen has divided her time between educating citizens about the death penalty and counseling individual death row prisoners. She has accompanied six men to their deaths. In doing so, she began to suspect that some of those executed were not guilty. This realization inspired her second book, The Death of Innocents: An Eyewitness Account of Wrongful Executions, which was released by Random House in December of 2004.
Sr. Helen is presently at work on another book RIVER OF FIRE: MY SPIRITUAL JOURNEY

drawings sister Helen prejean sketchnotes
Joe Crawford posted this 4 years ago.
What else did he post in March 2019?
The Date 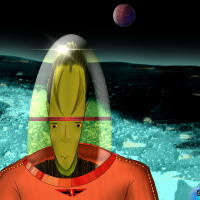 Serene & Green
Phone friends across from me on the NCTD Sprinter 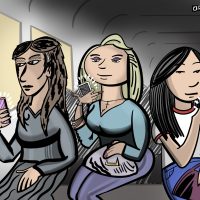