Depthcharge is the first game I would seek out at any arcade. Looking at it now, I can see how slow-moving it is. It’s rather uncomfortably slow in the same way Lunar Lander was. When I was between the ages of 8 and 10 I thought Depthcharge was amazing. I’m delighted to see that the Internet Archive has Depthcharge available to play online. I’ve had dreams about playing this game many times over the years.

It was 1978 when I first encountered it. It was in an arcade in the Philippines. I wish I could remember the other games in that arcade.

When I think about other games that have lingered in my psyche there’s only a few.

gaming memories videogames
Joe Crawford posted this 2 years ago.
What else did he post in August 2020?
The Date

Comic-Con@HOME
I don’t know how it ends. #comic #cubecat 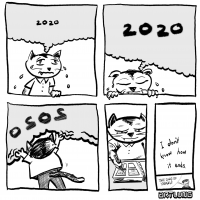