Set up a way for your blog to slurp your new Substack posts (i.e. on WordPress you can use an RSS aggregator plugin to pull in your Substack RSS feed) so they’re automatically archived on your own domain.

That was from Have you “Moved to Substack?”.

Ultimately the thing a creator wants is to control over their own work. I know freelance reporters whose work was lost entirely as some company changed management or focus. You gotta own your own stuff. And using existing, tried and true tools to pull stuff into a website you control seems like the minimum for someone who lives by their words.

And MAS is talking newsletters today, too. Though he’s a bit critical of himself on his predictions. I don’t think anyone has a handle on what comes next. I’d have said nobody would ever want to watch someone play a videogame live, it still amazes me that that is considered entertainment.

indieweb newsletters
Joe Crawford posted this 7 months ago.
What else did he post in December 2021?
The Date

Why are so many folks compelled by web3?
Mostly I don’t want to take selfies in front of art but for a very few including Mr. Warhol(a) I make an exception. The Broad is an overwhelming and yet somehow small museum. And good lord, two rooms with Basquiats? Intense. 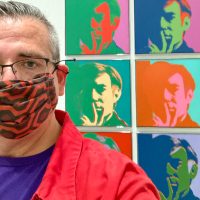