I asked my pal Chris the following in May 2020:

We attended a presentation by Soleri and a few other folks at the RH Fleet Space Museum in the mid to late 80s. Any idea what year? And do you remember any details of who or what entities were presenting? Was it just Soleri and his coterie or were there others?

Chris is a loquacious emailer, and so I got this in return:

As I recall, it was hot weather; likely summer.

Upon parking there, the Pontiac had just turned 2001 miles, which I thought was fun.

Therefore I’d say this puts that outing firmly in the summer of 1988. July, maybe August…

Onstage, I just remember Soleri, then perhaps two to three young people with him; and of course the Space Theater host guy.

Slides (?) of architectural drawings and models come to mind. (Plus those colorful, evocative photos of the shiny, happy folks who were living the Arcosanti dream.)

I also seem to recall there was a girl selling their cast bells in another area. 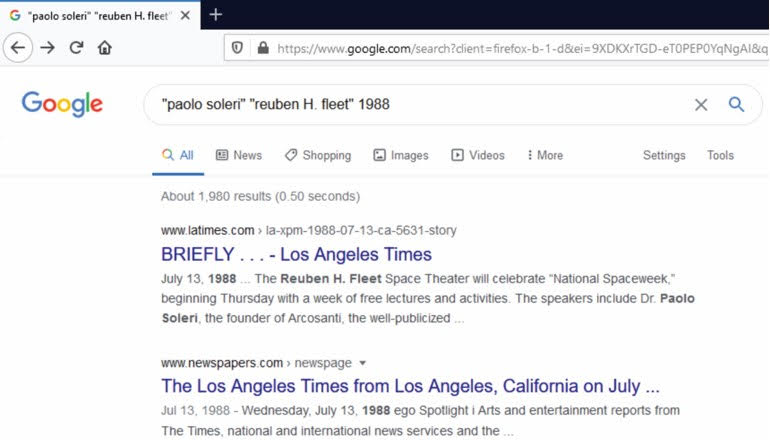 But then dang! Paywall; and/or, forced signup.

Lemmee see if I can snipe a cut/paste before the “Subscribe!” popup locks me out…

The Reuben H. Fleet Space Theater will celebrate “National Spaceweek,” beginning Thursday with a week of free lectures and activities. The speakers include Dr. Paolo Soleri, the founder of Arcosanti, the well-publicized futuristic city north of Phoenix; Derek Elliott, assistant curator of for the Department of Space Science and Exploration, and Carl Hodges, director of Environmental Research Laboratory at the University of Arizona. Call 238-1233 for more information.

don’t recall seeing the other dudes listed here; at least not without researching them. (Although now I’m back to “sleepy.”)

To me this looks like they may have appeared on different days during that week anyway.

(BTW were you along with me for the lecture I attended, another year, regarding Heavy-Lift Launch Vehicles? Met “Hoot” Gibson?)

Why do you ask and/or what makes you think of this now?

What prompted this was watching a new documentary last night called “Spaceship Earth” which is on Hulu. It details the genesis of the Biosphere 2 project from the origins of the commune that started it through the actual project, and details the controversies around it.

They were likewise inspired by Fuller, right? Spaceship Earth notions and such. Arcosanti was a particular aspect but thinking about self enclosed spaces and human sustaining pods was definitely in the zeitgeist. My memory was pricked around that. “Was Biosphere 2 mentioned at that talk?”—and my recollection was that, in passing, it was, but it was not the primary thrust of the talk.

Biosphere 2 would have been in the thick of construction by then (
https://en.wikipedia.org/wiki/Biosphere_2 ) but several years before the massive hype of the project itself. Columbia University took it over in 1995-2003, and the U of Arizona took it over in 2007 and ownership in 2011. The details of the managerial messiness during that early 90s period are mentioned briefly (Steve Bannon was a prime mover there, weirdly)—but not the full magilla of what Wikipedia’s synopsis entails.

Thanks for being my memory on this. 🙂 I really appreciate it!

In my teens I was fascinated by architecture and by the idea of utopias. I loved encountering Pierre L’Enfant and learning about Mies van der Rohe and Paolo Soleri — particular that idea of ARCOLOGY:

The term was coined in 1969 by architect Paolo Soleri, who believed that a completed arcology would provide space for a variety of residential, commercial, and agricultural facilities while minimizing individual human environmental impact. These structures have been largely hypothetical, as no arcology, even one envisioned by Soleri himself, has yet been built.

Like many utopias, it has not come to pass. Top down design of city-scale structures or colonies has been problematic and often destructive. Humanity is not unitary. Humanity subjected to top-down design which does not account for human choice and dignity ends up killing the best aspects of humanity.

I learned I love cities in all their disparate chaos. I appreciate the way urban planning seeks to steer rather than dictate our behavior. I think about design a great deal, and how everything we see every day is the result of some design process, for good or ill.

design Paolo soleri
Joe Crawford posted this 8 months ago.
What else did he post in January 2022?
The Date 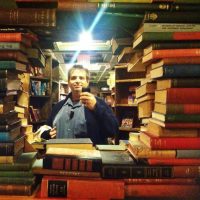 Me at @lastbookstorela in 2014. Photo by the remarkable and incredible @leahblooms from whom I was divorced on this day in 2020. A fine 15 year run of learning and partnership!
Bodysurfing Ultimate Media Guide by Spencer Dunlap