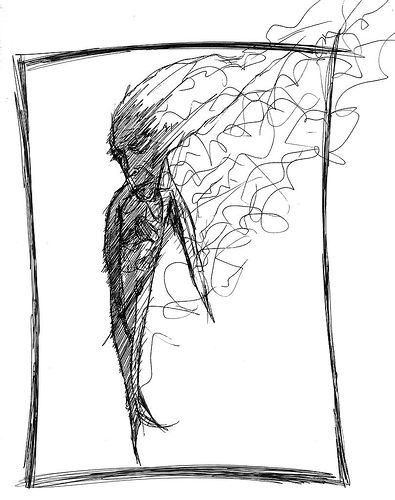 This is a hard drawing to look at for me. It bespeaks pain. The man is on fire, or covered in smoke. It could be interpreted as anti-smoking, perhaps, as many in my family smoked and paid dear prices for it.

The style is so fast, so confident, but not so much deliberate. It’s part of a style of mine to just keep making strokes and gradually an image appears. The idea was to draw fast and deliberately, to feel the emotion, and put it down. Often this resulted in horrible messes, and I threw lots of scribbles away. But occasionally it resulted in work of which I’m proud.

I can feel a kinship with the 19-year old self who drew this, perhaps I’d give the kid a hug. But I don’t think I savor feeling so _burned_ as I once did. Moroseness and nihilism might be, at times, entertaining, but they are not really great ways to live life.

Leah commented about Dog Nowhere that it seemed to be about an emotion, rather than an image of a dog. I think that’s an interesting insight. Smoldering Man is much more explicit I think in being an image that tries to instantiate an emotion.

drawings memories
Joe Crawford posted this 17 years ago.
What else did he post in July 2005?
The Date 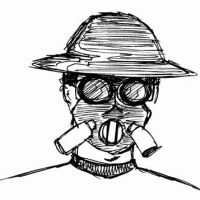