The smartest take on The Interview debacle I’ve read is in “America didn’t cave. Hollywood didn’t cave. Capitalism caved.” by David Atkins. This is the free market everyone says solves everything. Well, it does, but it doesn’t solve things in ways that have anything to do with “freedom of speech.”:

“But in truth, neither “America” nor “Hollywood” caved to the terrorist threat. Capitalism did. Sony is a Japanese-owned multinational corporation. Its decision to cancel the opening of the film was precipitated not by Hollywood studios, but by the defensive decision of a bunch of corporate conglomerate theater chains with only tenuous connections to the star-studded production companies in Tinseltown.”

“That’s capitalism. Capitalism doesn’t care about standing for the principle of free speech, or for patriotism, or for standing up to bullies. It cares about money.”

Joe Crawford wrote this Thursday December 18th 2014 at 10:41am That was 7 years ago. The Date Leave a comment tags→ freedom movies politics 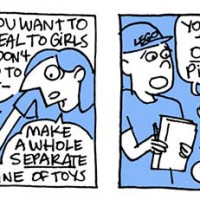 TO APPEAL TO GIRLS WITH LEGOS
TabSweep.txt PART 5