Exposing oneself to others ideas

One of the cool things about having family here last week and before was being exposed to their tastes and thoughts.

My sister’s boyfriend D. has some really cool tastes. Here are some of them:

James Kochalka’s American Elf is one. He has an interesting pitch for supporting his site:

American Elf: the Sketchbook Diaries of James Kochalka is a subscription-based website. That means you have to pay a little bit of money to access the archives (though the latest comic, on the homepage, is always free). The price for new readers is currently $1.95/month. That’s a lot less than a beer, or a movie — and it buys you thirty days’ worth of webcomics enjoyment (as well as access to the Internet-only MP3’s that James has been posting in the “goodies” section — he’s also a pretty well known rock star, you know). Most importantly, James himself pockets 70% of the money you send (the rest goes to maintain the site, and such stuff as that). You can think of this as modern-day patronage of the arts: your money insures that James can, among other things, pay his rent, buy art supplies, and continue to create new comics.

He’s also a fan of the excellent gadget blog Gizmodo — I get gizmodo news via places like Boing Boing and J-Walk.

He also likes The Inquirer, no, not that Inquirer. This one is a snarky tech news site.

And here’s a buddy of his Safe as Milk — I’ll be checking this one out again. In the future, you know, EVERYBODY will have a blog.

Same Difference is a comic by Derek Kirk Kim that looks promising.

D. fascinates me because if you met him — well, when I met him — I thought “here’s a guy who’s a classic indy rock type fellow” – likes everything to be super-underground and alternative. It would be easy to sterotype him — but you’d be wrong. The big curveball for me is he’s a giant football fan. Like rabid.

I really dig that he’s a good conversationalist – always with points of view that I would not expect.

That’s really all I have to say about that.

Joe Crawford posted this 19 years ago.
What else did he post in July 2004?
The Date 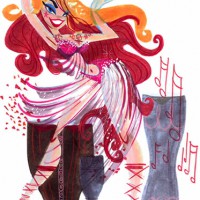