All this happened on Monday/Tuesday, and I totally missed it.

That Wal-Mart is about 4 miles away. And though we avoid it, I have been there twice.

Yeah, the shooter’s first episode in central Thousand Oaks is just around a couple corners from a shopping center we’ve been to enough times to find it eerie. About five or six miles from home. Scary. The kind of thing whose TV depiction makes skin crawl.

I do a lot of “reading” in there too Greg.

My grandparents in San Diego have a little sign in their bathroom which says _”No Reading During Peak Hours”_ — which always makes me smile. Because, well, it’s not really a joke. 🙂

It was the helicopters hovering over my house (and seemingly right outside my bathroom window) that clued me into that something was going on… Otherwise I’d have probably missed it too.

we didn’t totally miss it. remember when we were driving home and all the cops passed us going east and i said, ‘glad we aren’t going that way..’?

Prank I can get behind
Meg Vader 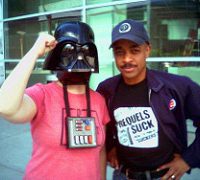