Two terms that are sort of fascinating the sort of odd, and which I thought were more widely distributed, and which I really like, are: “word finding” and “word salad:”

In the mental health field, word salad (originally from the German Wortsalat) is used to describe the symptom of confused, and often repetitious, language that is symptomatic of various mental illnesses. It is usually associated with a manic presentation and other symptoms of serious mental illnesses, such as psychoses, including schizophrenia. It describes the apparently confused usage of words with no apparent meaning or relationship attached to them. In this context, it is considered to be a symptom of a formal thought disorder. In some cases word salad can be a sign of asymptomatic schizophrenia; e.g. the question “Why do people believe in God?” elicits a response like “Because he makes a twirl in life, my box is broken help me blue elephant. Isn’t lettuce brave? I like electrons, hello.”

Word-finding is a common, and often annoying, problem. Almost every head-injured person has this problem to some degree. Head-injured people may talk normally; speech flows evenly and it’s easy to understand. But they’ll have this very odd problem–they’ll know the word they want to say but just can’t come up with it. Professionals call this “anomia,” which means “can’t name”. Everyone has an occasional anomia; those with a head injury have it frequently. It is particularly annoying if you are dealing with people all day long. For example, it will stand out if you’ve got to give a lecture to 100 people and you stumble over words. You develop poor self-esteem because you’re just not sure of what you’re saying anymore. A variation on this problem is that you say the wrong word. Instead of saying, “pass me the spoon”, you might say “pass me the noon.” Or, instead of using a similar sounding word, you may use an entirely wrong word. Instead of “pass me the spoon,” you may say, “pass me the car.” You may not even recognize that you said the wrong word until people point it out to you.

Joe Crawford posted this 17 years ago.
What else did he post in April 2006?
The Date

“ego”
Photo from the Egghunt 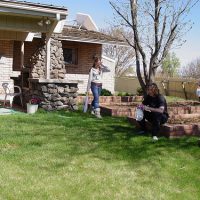