The other day at lunch my workmates and I spent an inordinate amount of time discussing people who played multiple roles in the same film. The major one I thought of was Peter Sellers — and Eddie Murphy is practically the canonical example from Coming to America. It vexed me that I could not think of very many off the top of my head, but it was sort of a pleasant kind of ignorance riffling through my mental rollodex, even if it came up empty.

As predicted, there turned out to be an extensive Wikipedia page dedicated to this topic: List of actors who have played multiple roles in the same film.

I suspect it’s incomplete, and if I come up with more entries you betcha I’ll be adding to that page. Perhaps you can think of some?

movies trivia
Joe Crawford posted this 14 years ago.
What else did he post in April 2008?
The Date

How about Woody Allen in “Zelig”? Tricky one! 🙂

The first one that comes to my mind is Tom Hanks in The Polar Express. I think that Mel Brooks is usually two roles in his movies as well. Just my two-cents.

Oh That Yahweh!
The Underwater Boy 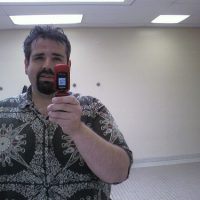