It’s been a long while since I did a full wrap up of what I’m looking at and reading. So here’s some miscellaneous stuff I’ve read and thought about and watched and listened to.

What’s in a name? Surely, any communication carries with it a promise. “Your word is your bond.” “A rose by any other name…” Should I promote myself with any or all of these titles, all technically true, some a paler shade of the truth than others? “Fake it ’til you make it?” If I do, am I a phony? Should I feel ashamed? Would others feel deceived, were they to know how much a title chafes against my own self-esteem, factual accuracy or no?

It’s really got some great questions in it. Read it.

My hero stew blogged today! He doesn’t blog very often, but he, and his latest project, a broadway play called Passing Strange are getting a whole lot of attention these days. For one thing, it’s been running for a while now, and some real strange stuff has been happening. From way over here in California it feels like this — first Spike Lee showed up, and next it was that First it was on April 17th, Whoopi Goldberg wore the Passing Strange sweatshirt on The View. 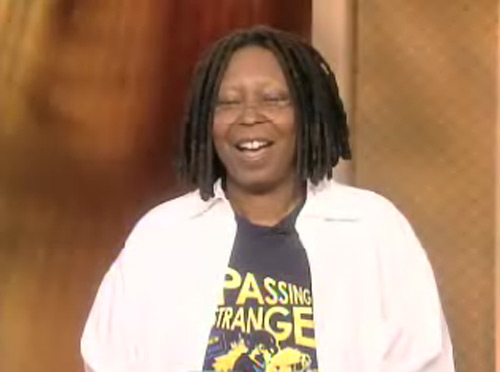 And the show keeps rolling along, and getting great reviews. On Monday, on The View, “see a musical performance from Broadway’s Passing Strange.” So if you watch The View, check it out. I’ll probably catch it online later. But don’t look for the music of Passing Strange on the pre-Tony awards show; they got cut, causing some controversy.

Stew’s post struggles with the very notion of going mainstream. There’s a tension in Passing Strange, that tension is that it’s both a rock show and a Broadway play. The thing is both things, and as such, Stew has certain expectations about what rock shows are about, but on the other hand, audiences on Broadway are not necessarily rock show crowds. I love the openness of his thoughts about this. I’ve been a delighted fan of stew for a long time, and part of my fandom is this openness to the process. I love that he writes what he’s thinking about his art. Basically, I love the man and his work. It hurts that I probably won’t see his show this year, but I enjoy every minute of the work that comes out. On the Passing Strange website, they have some song downloads — mp3 files of songs from the show. I have to admit, the song Keys has the capacity to make me cry.

Another artist blogging is Matt Brooker, who blogs at D’Blog of ‘Israeli. Matt is the incredible artist behind the War of the Worlds comic I blogged about last year. I’ve been following his blog since then. So his latest post is entitled The Wacom Airbrush: In-Depth Review. I swear Wacom should hire this guy! He is an artist who actually used to work with airbrushes, and acquired one of their “airbrush-style” stylii (styluses?) — the Wacom Airbrush Stylus. Now mind you, I think I’ve only held an airbrush one time, and that was when Chris was using one back in the late 1980s. The impression I got was that they sputter and make a mess and are hard to control. But some of my favorite artists yield them beautifully Vargas and Soyarama. Brooker does not correct my impression of the airbrush. He says even in digital form, this is an input device that it takes time to learn. It’s fascinating to me, as a person interested in user experience and human-computer interaction, to see a user who is reveling in an input device that is harder to use, and takes longer to learn to use, and will take practice to master. It goes against how I think about interfaces and user input. But of course this is art, so perhaps it makes perfect sense. Great artists must practice. It takes discipline to get better at it. It takes time. I probably will never buy this peripheral, but reading about it was joyful.

Speaking, as we sort of were, of comics, I present a wonderful new blog called The Journal of Caroon Over-Analyzations, which I found via Cartoon Brew. This blog cracks me up. Articles like From the archives: A Freudian Analysis of Beavis and Butt-Head or Alchemical Symbolism in Smurfs are terrifically fun to read. Some even point out real issues of culture and race, as in From the archives: Chromatic Sexism and Animated Felines:

Did you ever notice that patterns emerge in the fur colors of major protagonist characters of the domestic feline species portrayed in popular, secular, post modern children’s media? Female feline protagonist tend to have white fur, a reoccurring characteristic for the heroines in a significant number of films involving cats, examples include female characters from The Aristocats, Cats Don’t Dance, The Rescuers (she’s a mouse, but the concept still stands). On the other hand, the male feline protagonists have orange fur, examples include male characters from Garfield, Heathcliff, The Aristocats, An American Tail, Cats Don’t Dance, etc.

I’m not sure how to transition to this next one, but Matt Haughey shared a post on Google Reader that’s great: Web 2.0 Expo Presentation Rundown. That post has great links and encouraged me to explore further some of the videos of speakers at the Web 2.0 Expo. I mentioned the Clay Shirky video before, but the Andreessen and Fake Steve Jobs videos are also worthwhile.

It’s Sunday–Mother’s Day. Happy Mother’s Day to my own Mom, to Leah, and to all the other Mom’s out there!

Joe Crawford wrote this Sunday May 11th 2008 at 9:29am That was 13 years ago. The Date 2 comments tags→ art illustration misc music stew

ArtLung Blog · As a matter of fact…

Click here to cancel reply.
Iron Man, Redesigned
As a matter of fact…