Last night I was giddy with happiness to find my missing audioblogger.com posts (all 8 of them) on web.archive.org.

I had all but given up on ever finding these old files. If I recall, the features of Audioblogger were provided free to users of Blogger.

I am quite sentimental about the posts from December 2004, as they document Leah’s and my marriage.

It looks like Audioblogger (or was it called simply Audblog?, when did the name change?) became part of Odeo. This description of Odeo on wikipedia seems wrong to me, but I’m not sure:

Odeo was originally developed by founders Noah Glass and Evan Williams, who were previously founders of Audioblog and Pyra Labs respectively, and received funding from Charles River Ventures. Subsequently, Williams bought out Charles River’s interest in the company, as well as several other investors, and reformed the organization under a new company, Obvious Corp, which planned to develop new products, including Twitter.

Twitter I’m guessing you’ve heard of. There’s a post on Metafilter announcing “audioBLOGGER” from February 27, 2003. Audioblogger closed November 1, 2006, according to BoingBoing. I remember hearing about this and I recovered the files, but never put them somewhere permanent for myself. So how did I find them? I looked up the full url on web.archive.org, like this:

So I took advantage, and all the 8 files I lost were found. I wonder when these files went back online? I did a quick twitter search for mentions and found this post:

I tried my guess that many might be online and then–success!–I was listening to a file from a random twitter stranger, but from 2005:

I have checked periodically over the years and never had success. Are all the files that were once lost on audioblogger.com now found via web.archive.org? When did this happen?

audioblogger mp3 web-archive
Joe Crawford posted this 13 years ago.
What else did he post in February 2010?
The Date 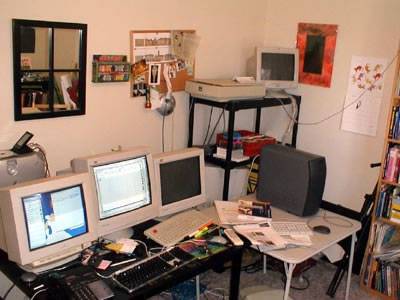 Revisiting my workspace from 2002.
Liz Prince