I went to Jason Calacanis’ conference Digital Coast 2000 way back when. I didn’t write about it, but it was inspiring. I found Calacanis inspiring, he’s a raconteur and a troublemaker and I have enjoyed his podcasts over the years. The other standouts from that conference were Mark Cuban who I quoted long ago The minute you think you’re smart — you’re toast. I wish I’d kept notes from hearing Barlow speak.

Here’s the description of that conference I got out of the web archive:

Digital Coast 2000 is the second annual gathering of the leading executives, artists and technologists building Southern California’s burgeoning digital industries. The three-day event takes place in association with The Directors Guild of America and NATPE with the support of Variety.

The three-day agenda features keynote and fireside chats with e-business leaders including Broadcast.com CEO Mark Cuban and Idealab Chairman Bill Gross. Panels on the e-Business Track include an e-services CEOs roundtable with Jeff Dachis of Razorfish, Bert Ellis of IXL, Robert Bernard of MarchFirst, Bob Gett of Viant, and Scott Mednick of Xceed; a “Digital Coast Enterprise Success Stories” panel examining how mature companies are re-engineering through Internet technology and new, networked operational models; “Internet Book Publishing and Online Literature” with leading executives and e-published authors, and a roundtable of top Digital Coast VC’s on the state of venture capital in Southern California.

Topics on the Digital Coast 2000 Convergence Track include “The e-Biznification of Hollywood” in which top executives from major and independent motion picture studios examine the Internet’s impact on the film industry;“The Animation Renaissance” featuring exclusive premiere screenings from top online animation producers; an Interactive and Enhanced Television panel showcasing live demos from award-winning enhanced TV content creators and the American Film Institute; “Talent Rights: Artists, Agencies and the Risks and Rewards of Online Opportunities” on the new Internet agreements with leaders of the DGA, SAG, and WGA; and panels such as “The Future of Intellectual Property” and “Music, Money and The P2P Revolution” including Ian Clarke of Freenet, Gene Kan of Infrasearch, Bill Bales of Applesoup, Jim Griffin of Evolab; and EFF co-founder John Perry Barlow.

We’re also very proud to announce the first annual Digital Coast Awards for excellence in digital entertainment — we’ll be honoring some of the hottest online entertainment projects from the past year at a special ceremony on September 14, from 4:30 to 6:30 p.m.

What I remember of Barlow was that he really helped me understand what internet sharing was about. Napster and intellectual property were deeply in the news, and Barlow contextualized internet sharing as part of music history. The Grateful Dead famously allowed fans to record and share their music. It helped me put internet freedom and “intellectual property” on my map of free public goods — libraries and shared knowledge in the form of science. He was inspirational.

Barlow was in the zeitgeist of the time back then. Here’s something from Courtney Pulitzer’s CyberScene, a quote from Barlow from 1999 about his own mother dying:

A vertible institution himself, the great woman (and institution) behind the great man — John Perry Barlow — is Miriam Jenkins Barlow Bailey. John’s mother died a few weeks ago and he sent a moving tribute about her to friends, and granted me permission to reprint it with her picture.

John wrote: “My mother was immense, *much* larger than life. No one who met her came away untouched – or unscathed, as the case may have been. She has kept an electric tension on a line that ran through the center of my life all its course. Now, all at once, that line’s gone slack. The world is suddenly a far less interesting place. Some years ago, shortly after his own mother died, John Kennedy, Jr. mused to me, ‘I don’t think anyone really becomes an adult until both of his parents are dead.’ Now I’m starting to understand what he meant. …”

How sadly ironic that John quotes his friend JFK, Jr., who he (in addition to the rest of the world) has had to say goodbye to also. I saw Mr. Barlow on television talking about his friendship with JFK, Jr. this past week, and can only think of how the world does seems a far less interesting place when one loses someone dear. Death is a great and final tragedy, but as John and as JFK, Jr. both indicate, it’s a release, a dawning and forces us to grow up a little more, straighten our back, lift our chin and go boldly forward as an “adult.”

God Bless Miriam Jenkins Barlow Bailey, John F. Kennedy Jr., Carolyn Bessette Kennedy and Lauren Bessette. May they all go forth in peace and may we all breathe a bit deeper today in appreciation of our gift of Life.

digitalcoast2000 John Perry barlow memories
Joe Crawford posted this 5 years ago.
What else did he post in February 2018?
The Date 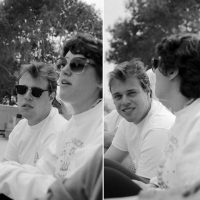 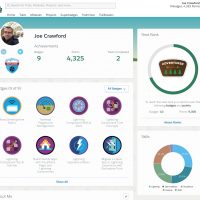