Another thing to worry about! Surfer’s Ear

My sister, who loves me dearly, is now worried about me getting Surfer’s Ear, something I’d never heard of. I did used to get swimmer’s ear as a kid a fair about. I’m pretty sure it was the result of me not cleaning my ears well enough after swimming in pools or the ocean. In my teens I got in the habit of doing better with that and then irrigating my ear with vinegar when I did get an ear infection. I haven’t had ear trouble much since then. It looks like my last infection was in 2008. And in this COVID year where I’ve swum so much, I’ve gotten no infections.

Surfer’s ear (also known as swimmer’s ear) is a condition where the bone of the ear canal develops multiple bony growths called exostoses. Over time, this can eventually cause a partial or complete blockage of the ear canal.

The condition is primarily caused by prolonged exposure to cold water or wind. Cold water surfers are six times more likely to get surfer’s ear than warm water surfers.

UCI describes the symptoms and complications as follows:

An ear infection is one of the primary symptoms of surfer’s ear.

It is important to seek treatment early. When the ear canal is narrow, water and debris can become trapped and cause an infection. These infections are difficult to treat and require several visits to an ear, nose and throat physician for cleaning of the

When 90 percent or more of the ear canal is blocked, significant hearing loss occurs. The loss can only be relieved by removing the bony growths in the ear.

I’m not concerned as of this minute, but obviously I will be vigilant.

medicine swimming
Joe Crawford posted this 7 months ago.
What else did he post in December 2021?
The Date 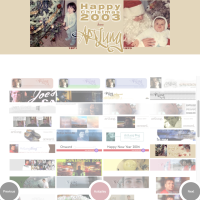 Having a personal website for a long time is neat because I can look back at prior iterations and components I’ve saved! Like this header from Christmastime 2003! Which in turn features photos from me as a kid. You can see them all at artlung.com/headers
Remember .sig files? 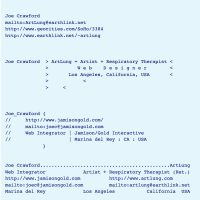