Your Driver: The Rock

There was a tweet saying that Dwayne “The Rock” Johnson is going to be in another movie based on a videogame. 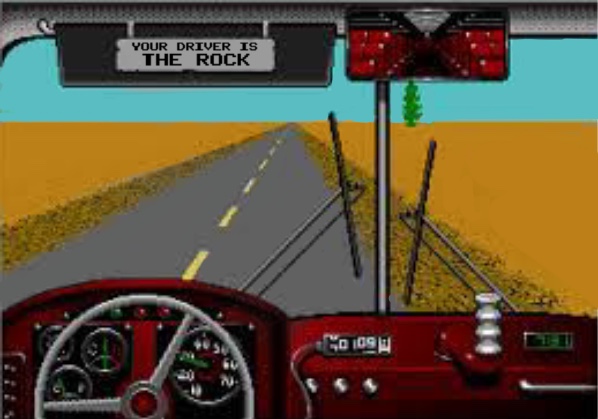 Which of course is an explicit allusion to the incredible video game Desert Bus by Penn & Teller!

The bus contains no passengers, there is little scenery aside from an occasional rock or bus stop sign, and there is no traffic. The road between Tucson and Las Vegas is simplified compared to the real highways: it is now completely straight. The bus veers to the right slightly, and thus requires the player’s constant attention. If the bus veers off the road it will stall and be towed back to Tucson, also in real time. If the player makes it to Las Vegas, one point is scored. The player has the option to make the return trip to Tucson for another point, a decision which must be made in a few seconds or the game ends. Players may continue to make trips and score points as long as their endurance lasts. Although the landscape never changes, an insect splats on the windshield about five hours through the first trip, and on the return trip the light fades, with differences at dusk, and later a pitch black road where the player is guided only with headlights. The game cannot be paused.

It is, to me, the apotheosis of “realistic video game.” What could be more real than simulating real life and the low pay of a bus driver? I’ve loved the idea of this game since I read about it in 1995.

Desert Bus for Hope is an annual charity play of the game that never fails to make me smile. Episode 5 of A Life Well Wasted documents the event and is a brilliant must-listen.

charity games videogames
Joe Crawford posted this 1 year ago.
What else did he post in January 2022?
The Date 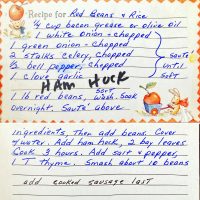 HAM HOCK / one of my mom Phyllis Crawford’s recipes. A family favorite we acquired in New Orleans. First time I had red beans and rice? We visited Buster Holmes’ for the first time. I knew it because in 1977 I’d seen his place featured on SNL.
Diving into a family photo scanning project. Utterly charming. Unsigned artwork. 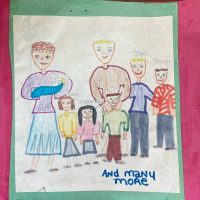