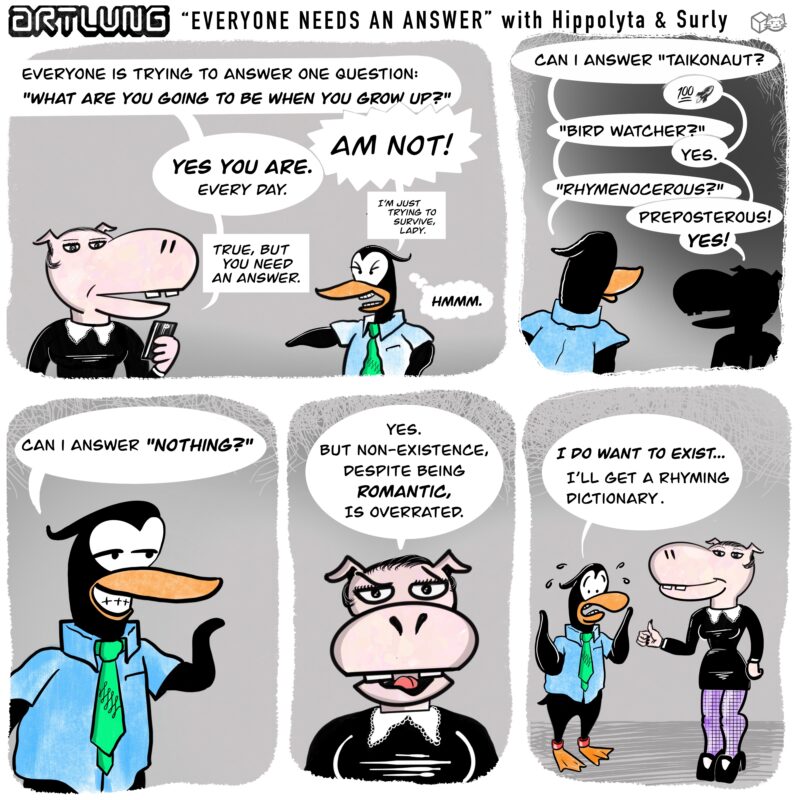 “Everyone Needs An Answer” with Hippolyta & Surly. #webcomic #cubecatextendedunuverse 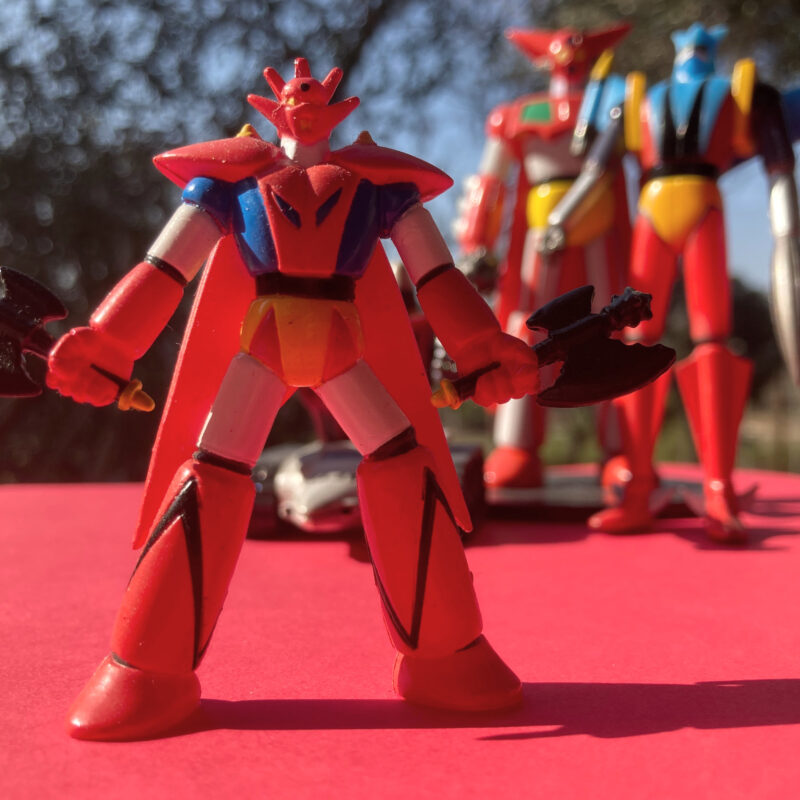 New Bot Day! Getter Dragon joins others in the Getter family. Truthfully, I’ve had Getter Dragon (ゲッタードラゴン) several years but never introduced it. The mid-1970s were wonderful for giant robots. 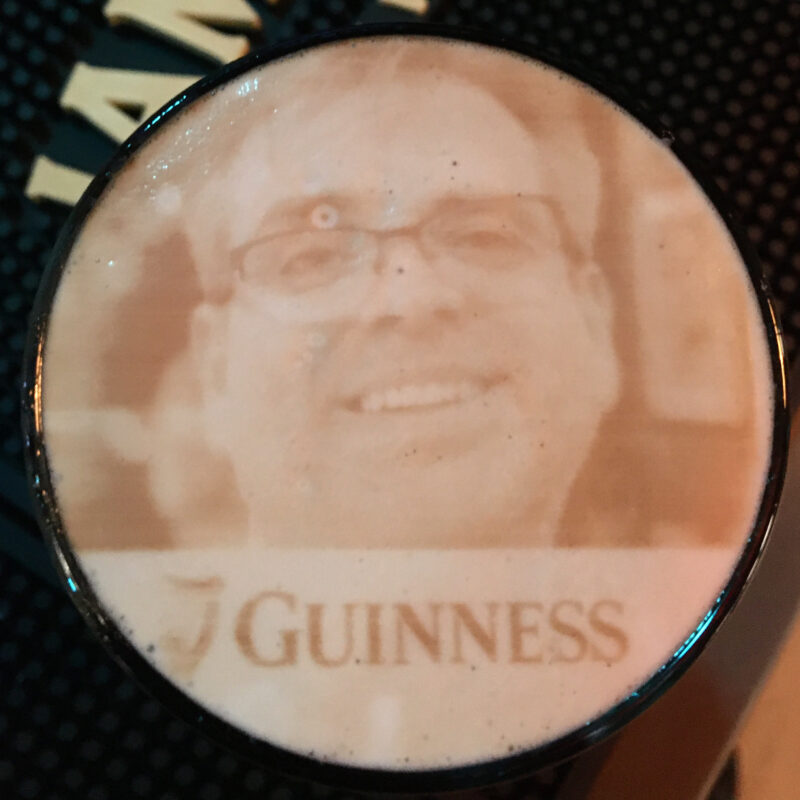 In February I got a snapshot of me printed into the top of a Guinness beer at @supply_and_demand_lbc / @ink_and_drink_lb oh boy I love goofy fun stuff like this at great events across Southern California. I miss it. #savelongbeachbusinesses 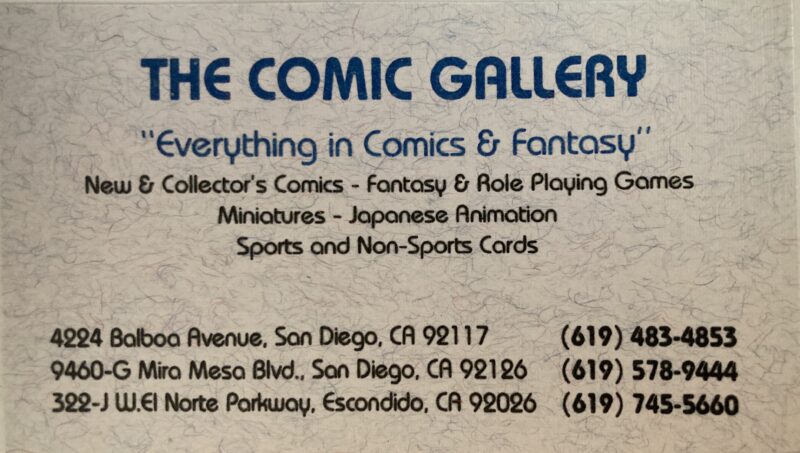 I went to the Balboa Avenue Comic Gallery. It was next to a sewing machine shop that’s still there. I don’t know when it closed but it’s at least 10 years ago.

It was halfway between my Grandparent’s house and Pacific Beach. 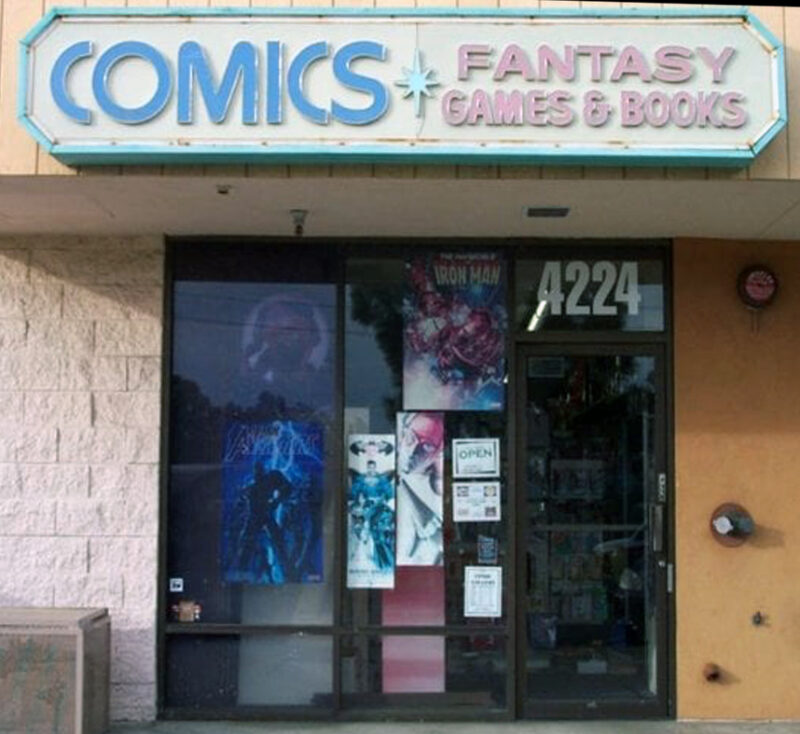 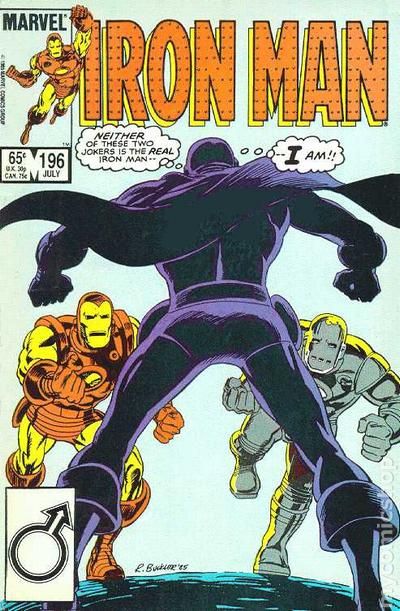 …something about that image hit me hard in the Summer of 1985. I think it’s to do with identity. Who am I? Who claims to be me? I was 15 years old. And I had a job, working in a bank making $3.35 an hour doing clerk type work. I had enough to spend 65 cents on a comic book. I wasn’t driving yet but I could take the bus or I could get a ride with my Mom who was supportive of whatever I wanted to do.

In 1985 and in the following years I fell back in love with comic books. I’d had had a smattering of comics since I was 5 or 6 years old but they didn’t stick with me. I remember a treasury oversize Batman comic with the origin story, one of those huge things. I remember a Marvel Fun Book which made my head spin with how many characters Marvel had who I had no idea who they even were. I remember picking up an X-Men comic from a friend when I was 12 and living in New Orleans. Who are all these characters? Who is who’s parent? What are they talking about? What’s a mutant? I was lost.

And 5 years later, in San Diego, I discovered comics better suited to me. More self-contained. Beanworld by Larry Marder loomed large. It was weird and spiritual and sort of like a board game and iconic but very much a contained universe and I loved it. Soon enough Watchmen and The Dark Knight Returns would blow my mind in their intricacy and ideas and huge dystopian action. I followed Thor by the Simonsons and Iron Man and I also picked up Who’s Who in the DC Universe and the Marvel Universe Encyclopedia. I got a real sense of how many stories had been told in the decades of DC and Marvel.

I subscribed to the Comic Buyer’s Guide. It was a newsprint weekly newspaper about comics delivered to home. I loved learning about the comics business and saw how nutty and tenuous an enterprise it was. I learned how creators would miss deadlines. How talent would ping pong between places. How some people were jerks. How all the companies hoped to cash in with movies and animation and how often that failed. In those pages I remember reading how James Cameron of Aliens wanted to make a Spider-Man and thinking if anyone could, he could.

And I attended San Diego Comic-Con. What a luxury to be in 8th-12th grade in a place with SDCC? I lucked out big. I could just walk in. What an astounding privilege to have! Some people around the world can only dream of attending.

And yet I never made comics.

I created a character or two. I made some drawings to make my classmates laugh. Made drawings for greeting cards. Made lovely maps. I never tried to tell a story. Not the smallest narrative. I had no story to tell. Though that’s not true, I could tell amazing stories: but I didn’t realize that my own history could be what I could tell. Diary comics seemed like something other people could do. Not for me.

I’m learning in the past 2 years that I do have stories to tell. I make comics now.

It only took 35 years to get started. 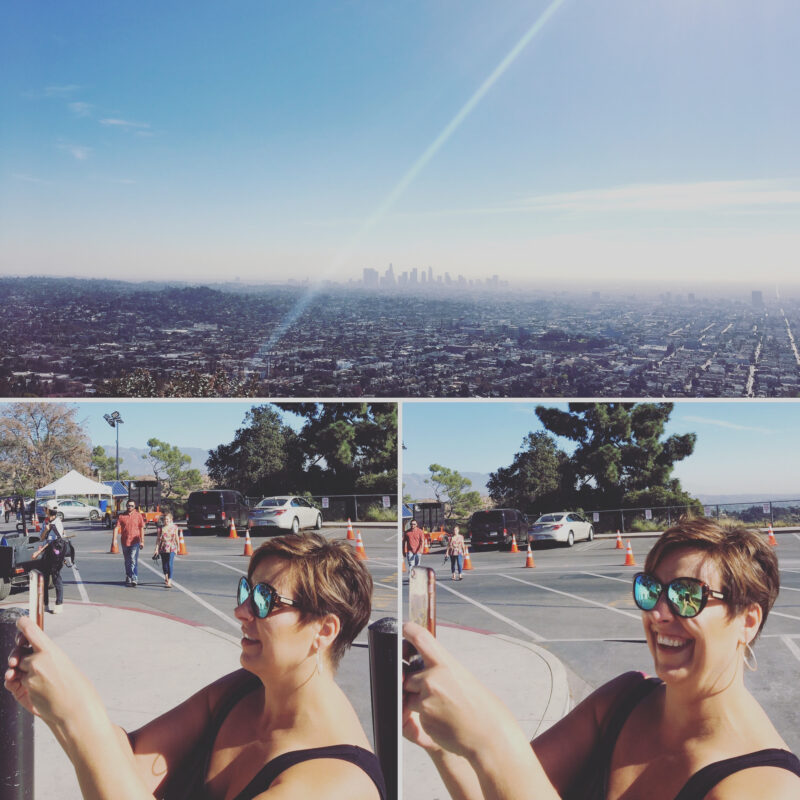 On such a Winter’s Day with Kelly in 2017 at Griffith. 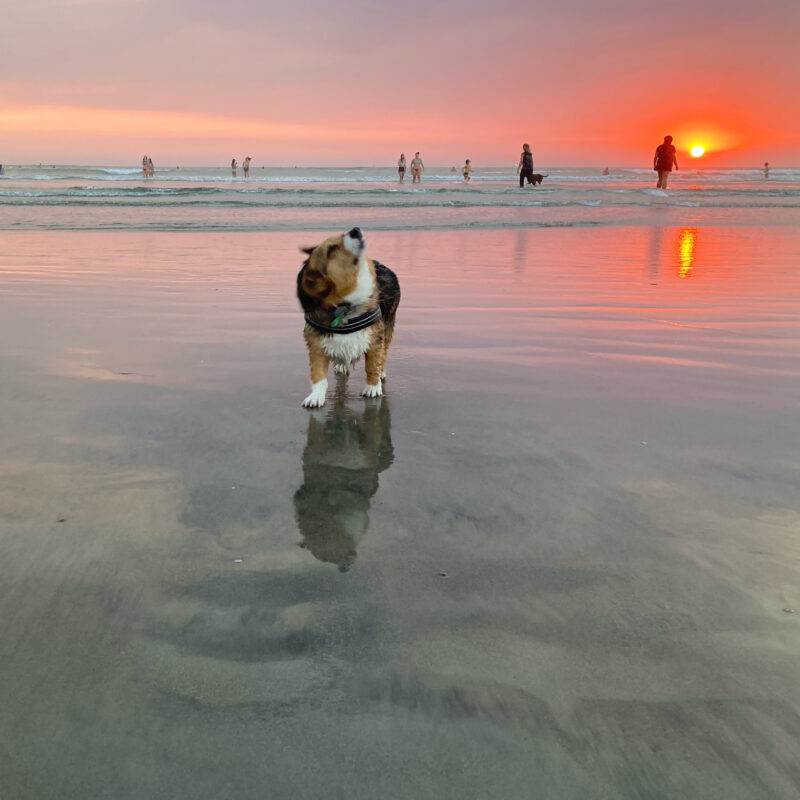 Gwen and the fiery sunset.

Behold! Image Maps that are server-side! Absolutely ridiculous and enabled by Apache. Check it out.
Permalink 2020 September html programming Make a comment 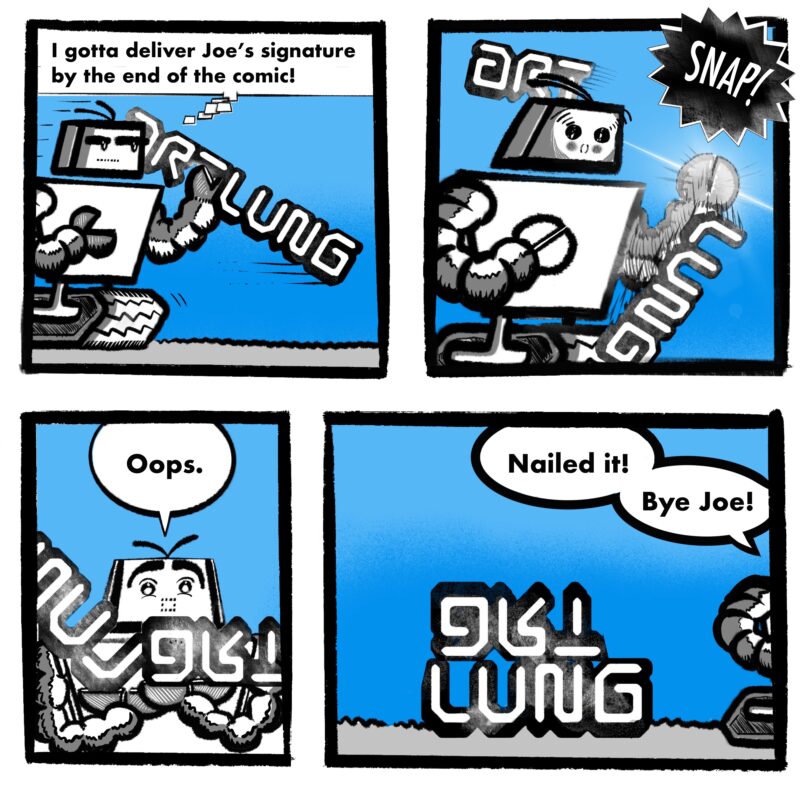 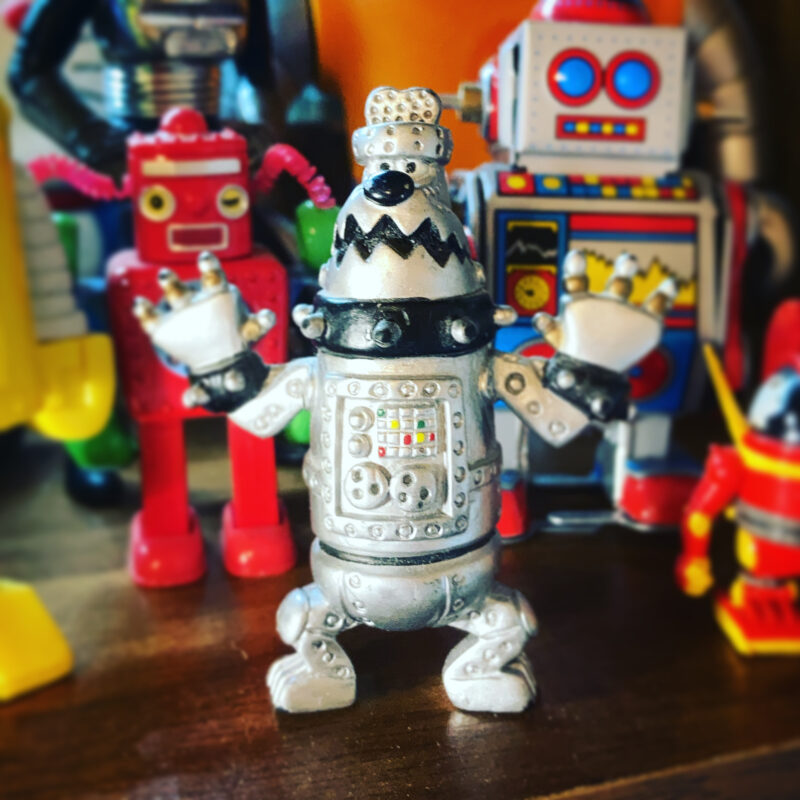 New Bot Day! Preston is a robotic dog — “Cyberdog” — he appeared in the short “A Close Shave (1995).” Fred Ramsbottom built him to help in his wool factory and after the scientist dies Wendolene Ramsbottom inherits the factory and Preston. But Preston turns bad and shenanigans ensue, resolved by Wallace & Gromit of course! 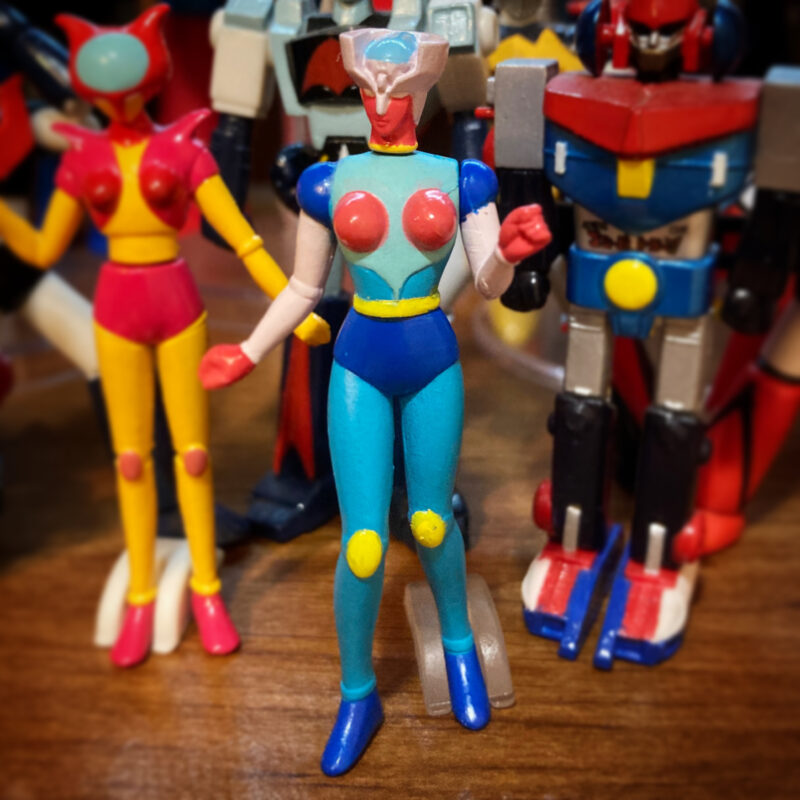 New Bot Day! Diana A (ダイアナンA) was piloted by Sayaka Yumi, who also piloted Aphrodite A. Both are mecha of peace, but include oppai chest missiles . Diana A is named for the Roman goddess of the hunt. She’s from the Great Mazinger franchise in the mid 1970s. This Diana is a gashapon (ガシャポン), a toy that can be sold from a vending machine. She’s seen with other gashapons from my collection. 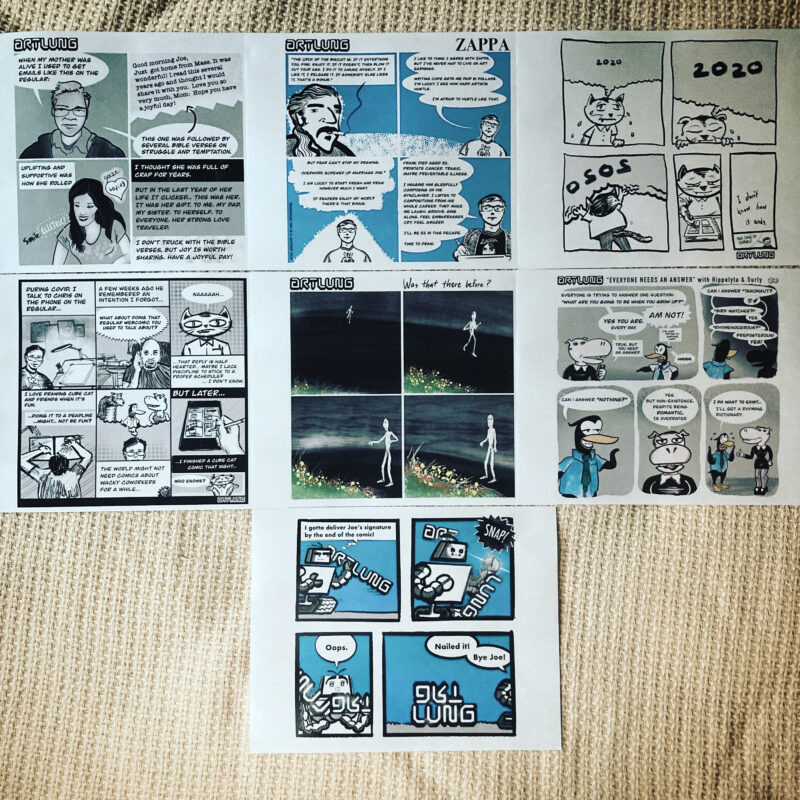 Last week I was thinking about how lucky I was to be a teenager in San Diego. I attended San Diego Comic Con in the Summer and didn’t realize what a luxury that was. I learned all I could about comics, comic art, newspaper strips, publishing, copyright, comics history, animation history. I submitted one comic to the New Yorker in 1988, got a rejection letter and thought that meant being a cartoonist was impossible. I’m amazed to see these 7 comics I’ve made since January printed out. No plan. I like making comics. That’s enough. 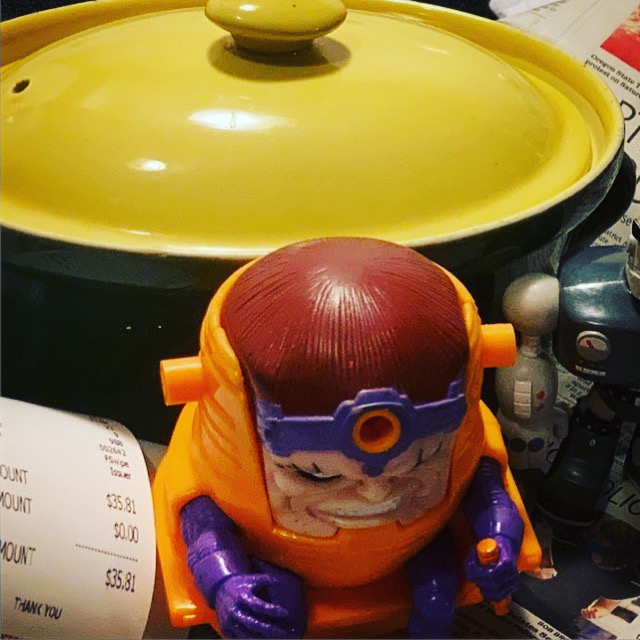 Antique shopping to me is casserole pans and MODOKs.

Best Practices. I signed up to fight disease long ago. We’re all signed up now. #covidcomic #respiratorytherapy #donoharm #masks #webcomic2020Sep14 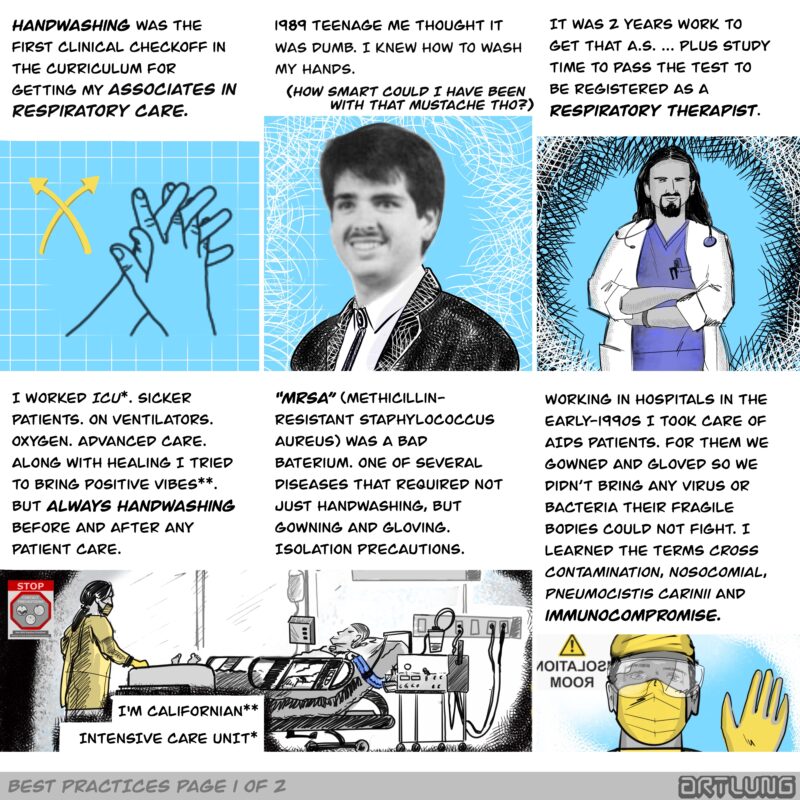 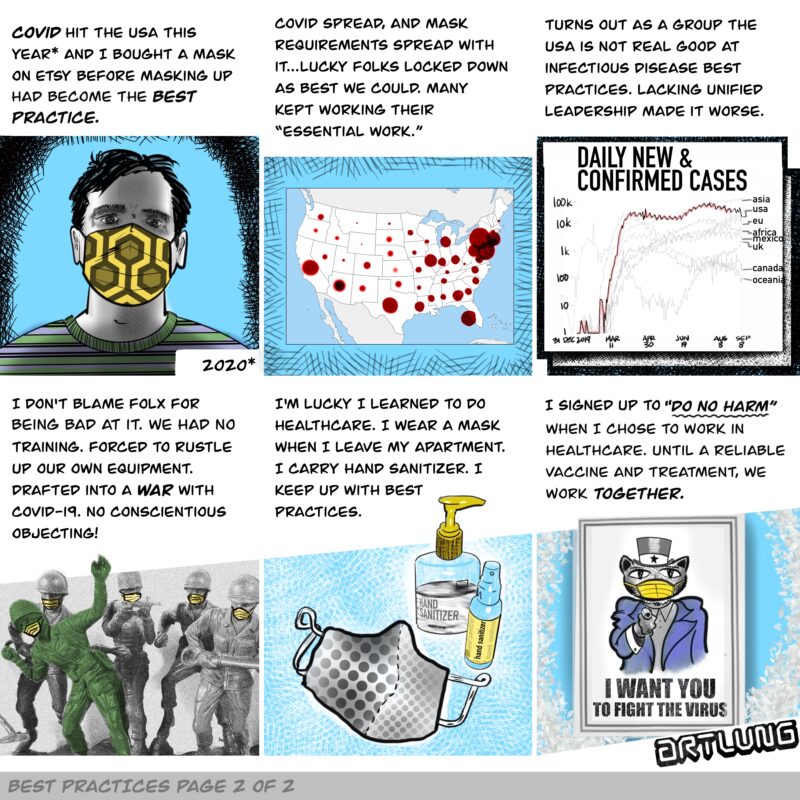 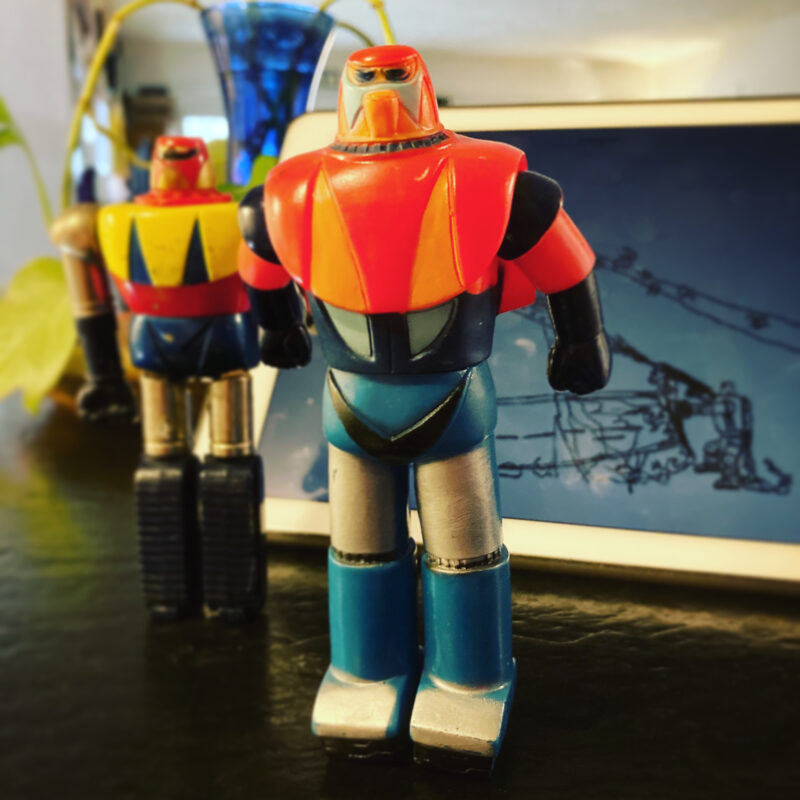 New Bot Day! Getter Poseidon is from the Getter series of 1975-6. This is a sofubi (ソフビ) soft vinyl toys. It’s made by filling molds with melted vinyl. Based on my research this is an unlicensed bootleg toy. I paid a Japanese seller on March 22 on eBay. Yuichi, the seller, warned me by message “Due to the influence of COVID-19, the shipment of ‘International e-packet light’ SAL flights from Japan to overseas has been urgently canceled.” At the same time I had a purchase from Hong Kong that the seller cancelled even though I won it. Yuichi was very thorough in explaining the options for cancellation and refund. We messaged periodically throughout, and 94 days later the package arrived. Getter Poseidon means a lot to me. I realized 8 years ago that this bot is one that I’ve been drawing subconsciously since I was about 10 years old. Bot collecting has taught me a certain amount of patience. I thanked Yuichi profusely when it arrived in June. It’s a time of hardship for many, and patience and care means so much. Hang in there everybody. 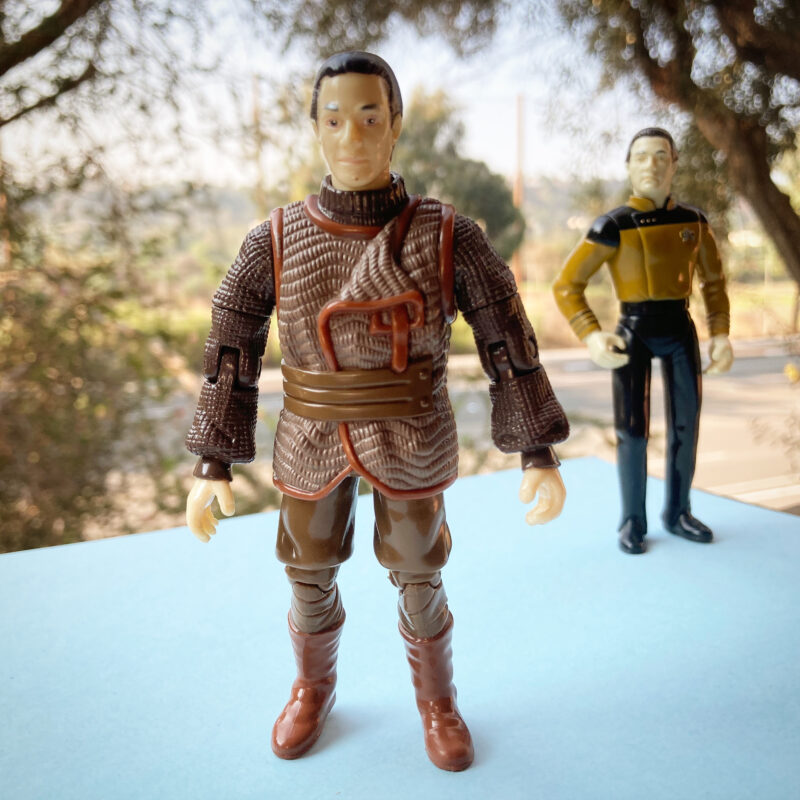 New Bot Day! Lore is a sentient android robot from the tv show Star Trek: The Next Generation’s first season (1988). Lore was villainous, believing himself superior to organic creatures. Dr. Noonian Soong & Juliana Soong’s experiences with Lore caused them to build Data, a “younger brother” to Lore, without emotions. Lore made trouble throughout his existence and was deactivated in 2370. 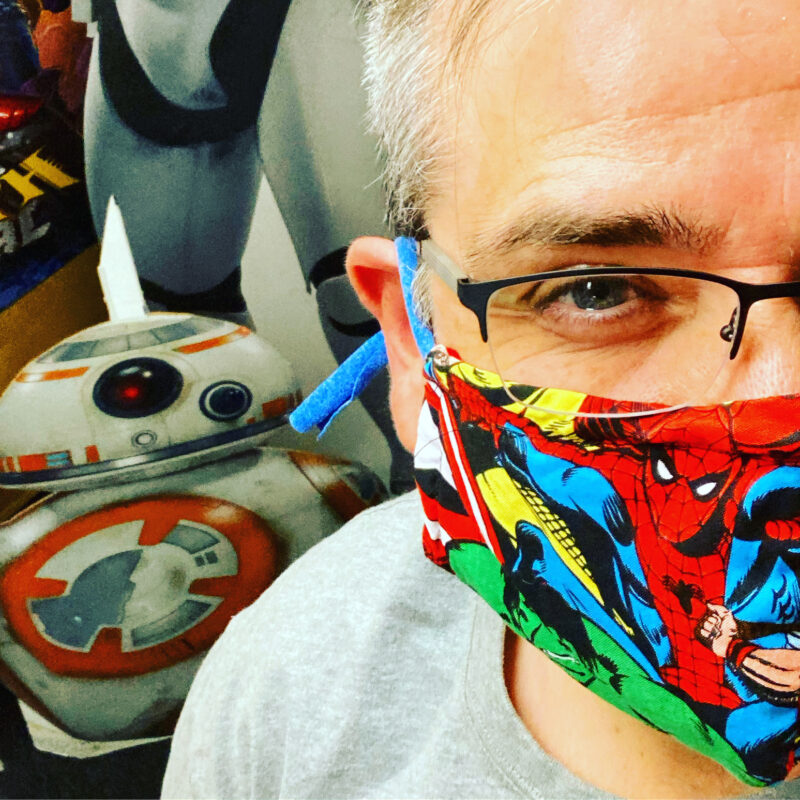 Got a drive-in flu shot then stopped at the great Southern California Comics for a robot selfie. Take care!