Yesterday I got up very early. I went to a continental breakfast thing about learning to deal with the media. It was mostly for Public Relations people, but I deal with the press rather often these days, and knowing how to approach and not approach them is a valuable skill. So anyway, that was productive.

Work, thankfully, was good. I had a pleasant day.

After one o’clock I decided I’d get a shoeshine. I had worn my black shoes – my Doc Martens, which I’ve had for about 8 years now. They looked really shabby. Along the front ridge of the shoes was wear and tear, and what was once black, had faded to gray. I’d never thought — no, that’s not true — I’d wanted to do something about it, but just didn’t care that much. A kind of “shoe apathy” set in. I have been ignoring my outward appearance for so long, that I just don’t give a damn about such things. But for some reason, that early morning networking event made me want to improve my shoes.

So I thought Horton Plaza or the train station (recommended by Sassy would have a shoeshine stand. I remember from my childhood there being one of those stands with the 2 chairs on a riser, and a fellow or two shining a businessman’s shoes – but I walked to Horton Plaza, then to Santa Fe Depot – and no go. I did find one out in front of the Wyndham Emerald Plaza. The proprietor was very nice. I asked him how much, ($5) and got on up on the stand.

The guy – maybe in his 50s – grey hair, quiet, I think he was an immigrant but he didn’t speak enough for me to place the accent. Watching him work, and the people walking by, was a delight. Having your point of view at about 10 feet above the city street as people walk by is really great. People look up at you a little, but you can peoplewatch with impunity! I remember one women, perhaps late 30s, blond. She was wearing a flimsy skirt, which was blowing in the wind down Broadway. She was compensating for it by holding her left hand behind her back and checking that the skirt stayed down. I’m sure I’ve noticed women doing this before, but I found this fascinating. Not so much because she was attractive, but maybe because it was like I was seeing this issue (women need to be cognizant of skirts not doing the Marilyn thing when they don’t want them to) and I was fascinated. As much as I’m becoming more aware of how I look, I’m glad I don’t have all the expectations that American culture puts on women. That’s like an order of magnitude mode baggage!

I digress. The shoeshine man was really an artist. With his brushes and polish and lots of elaborate motions he worked through the roughed leather and put down new coats of black stuff (varnish?) . He spent about 35 minutes applying 2 coats of the stuff, with the rough brushes, and soft brushes in between. At the end he took what looked like a denim rag and buffed both shoes, at times there was an audible “snap!” across the shoes. This was an impressive audio-visual spectacle for me. I mean, what do I know from shoeshines. I had never gotten one! But I began to think of his work as not so different from my working in Photoshop. Applying layer after layer, carefully massaging each layer, until an image emerges that is the one that the Photoshopper wants.

And yes, I’m aware that I can slip into grandiosity.

Yesterday was a good day. And I think there are more good days to come. I’m feeling good more of the time. I’m learning a lot about myself (it’s not all just shoeshines and La Jolla Cove) – and I hope to continue this process of learning just who this Joe Crawford character is. 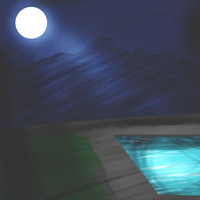 Untitledscape
the best blog on earth