Science, Theology, and the Ontological Quest

I love their mission, which is sadly bound up in This flash movie.

I like it so much here it is, transcribed:

1. Integration of Science and Human Values

The double goal of the STOQ project is to contribute, through the Academic activities (teaching and research) of its partners:

2. Science-Religion Relationship
All the Partners of the STOQ Project share, within the common Christian faith, some basic ideas as to the role of Science in its relationship with Religion.
The main shared convictions are:

Humans are indeed part of the universe, and the universe receives its sense by the presence of intelligent agents in it, such as humans are, for a precise willing of God, the Creator.

The project is thus deeply embedded in this framework, recently and authoritatively brought newly to the attention of all mankind by two Encyclical Letters of the Pope John Paul II: Veritatis Splendor (Truth Splendour) and Fides et Ratio (Faith and Reason) [Both are freely downloadable from the Vatican site]

The Veritatis splendor[1] affirms that the depths of the human heart «there always remains yearning for absolute truth and a thirst to attain full knowledge of it. This is eloquently proved by man’s tireless search for knowledge in all fields. It is proved even more by his search for the meaning of life».

For that reason, the Catholic Church stresses that ethics is the ultimate dimension of education. In fact, the Church knows [3] «that is precisely on the path of the moral life that the way of salvation is open to all.»

The Veritatis Splendor[34] affirms also the dependence of freedom on truth. Hence, «Reason and free will are linked with all the bodily and sense faculties. The person, including the body, is completely entrusted to himself, and it is the unity of body and soul that the person is subject to his own moral acts.» [48]

The other encyclical letter, Fides et Ratio [1], stresses from the beginning that «the fundamental questions which pervade human life [are]: Who am I? Where have I come from and where am I going? Why is there evil? What is there after this life?».

This means that, »Reason and faith cannot be separated without diminishing the capacity of men and women to know themselves, the world and God in an appropriate way.« [16]

Thereafter, the encyclical letters points out in [18] some basic rules that should be observed:

a. The first of these rules is that reason must realize that human knowledge is a journey which allows no rest.

b. The second rule stems from the awareness that such a path is not for the proud who think that everything is the fruit of personal conquest.

c. The third rule is grounded in the "fear of God" whose transcendent sovereignty and provident love in the governance of the world reason must recognize.

The importance of science is stressed in [25] as follows «All human beings desire to know and truth is the proper object of this desire. Everyday life shows how concerned each of us is to discover for ourselves, beyond mere opinions, how things really are. Within visible creation, man is the only creature who not only is capable of knowing but who knows he knows, and is therefore interested in the real truth of what he perceives. […] It is rightly claimed that persons have reached adulthood when they can distinguish independently between truth and falsehood, making up their own minds about the objective reality of things. This is what has driven so many enquiries, especially in the scientific field, which in recent centuries have produced important results, leading to genuine progress for all humanity«.

The morality of the scientific research both in natural sciences and the humanistic disciplines implies before all the use of a rigorous method in both fields. Only at this prices the interdisciplinary dialogue among them can produce effective and durable results.

In other terms, a fruitful dialogue among scientists, philosophers, and theologians for the common goal of the whole humanity welfare, implies a strong effort of clarification of the different ontologies in which they operate, as well as *a rigorous definition of the relationships among such ontologies.

This essential statement summarizes the methodology we follow in our Project, as it is exemplified in the title of our Project and its logo.

Why am I transcribing this? because it’s in the news:

A Vatican cardinal said Thursday the faithful should listen to what secular modern science has to offer, warning that religion risks turning into “fundamentalism” if it ignores scientific reason.

Cardinal Paul Poupard, who heads the Pontifical Council for Culture, made the comments at a news conference on a Vatican project to help end the “mutual prejudice” between religion and science that has long bedeviled the Roman Catholic Church and is part of the evolution debate in the United States.

The Vatican project was inspired by Pope John Paul II’s 1992 declaration that the church’s 17th-century denunciation of Galileo was an error resulting from “tragic mutual incomprehension.” Galileo was condemned for supporting Nicolaus Copernicus’ discovery that the Earth revolved around the sun; church teaching at the time placed Earth at the center of the universe.

“The permanent lesson that the Galileo case represents pushes us to keep alive the dialogue between the various disciplines, and in particular between theology and the natural sciences, if we want to prevent similar episodes from repeating themselves in the future,” Poupard said.

But he said science, too, should listen to religion.

“We know where scientific reason can end up by itself: the atomic bomb and the possibility of cloning human beings are fruit of a reason that wants to free itself from every ethical or religious link,” he said.

“But we also know the dangers of a religion that severs its links with reason and becomes prey to fundamentalism,” he said.

“The faithful have the obligation to listen to that which secular modern science has to offer, just as we ask that knowledge of the faith be taken in consideration as an expert voice in humanity.”

Poupard and others at the news conference were asked about the religion-science debate raging in the United States over evolution and “intelligent design.”

“A hypothesis asks whether something is true or false,” he said. “(Evolution) is more than a hypothesis because there is proof.”

He was asked about comments made in July by Austrian Cardinal Christoph Schoenborn, who dismissed in a New York Times article the 1996 statement by John Paul as “rather vague and unimportant” and seemed to back intelligent design.

Basti concurred that John Paul’s 1996 letter “is not a very clear expression from a definition point of view,” but he said evolution was assuming ever more authority as scientific proof develops.

Poupard, for his part, stressed that what was important was that “the universe wasn’t made by itself, but has a creator.” But he added, “It’s important for the faithful to know how science views things to understand better.”

The Vatican project STOQ has organized academic courses and conferences on the relationship between science and religion and is hosting its first international conference on “the infinity in science, philosophy and theology,” next week.

catholic philosophy religion science
Joe Crawford posted this 17 years ago.
What else did he post in November 2005?
The Date 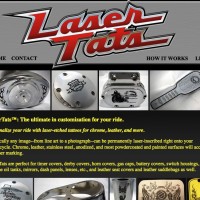 LaserTats.com: Custom Engraving on your Motorcycle
“Music is the best.”