Misc is out of Style

To start with, a random screenshot from a video from 1989: 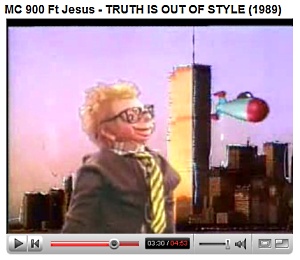 I enjoy his music very much. He got his name from a vision of Oral Roberts:

May 25, 1980, while overlooking his religious center which was in financial difficulty:

“‘I felt an overwhelming holy presence all around me. When I opened my eyes, there He stood … some 900 feet tall, looking at me … He stood a full 300 feet taller than the 600-foot-tall City of Faith. There I was face to face with Jesus Christ, the Son of the Living God. I have only seen Jesus once before, but here I was face to face with the King of kings. He reached down, put his Hands under the City of Faith, lifted it, and said to me, “See how easy it is for Me to lift it!”‘”

“Oral recalled that his eyes filled with tears, and Jesus assured him that He would speak to the ministry’s partners and that the City of Faith would be finished.”

On to Misc, or, continuing the misc!

Ubuntu has a new version out — 7.10. A few weeks ago, our houseguests brought with them a sad, cheap Wal-Mart laptop that would neither boot nor behave. I installed Ubuntu (6) for them and it’s given them what they wanted, a basic email and photos and web browsing machine. I have been impressed and as my Windows 2003 Server machine gets lamer (remember that?) it makes me think seriously about converting it to Linux. There are several apps I would miss: FileZilla, TextPad, Paint.NET, iTunes. We’ll see. I’m not really a zealot about open source, but I’ve been following Mark Pilgrim’s posts about switching to Linux and it has me intrigued. And it was great to install an OS on an x86 Machine and not have to dig around in boxes for stupid Activation Keys and do Windows Activation. It might be great for me too.

MAS read a book about SuperFoods, and the list he posted has me interested. Here’s the Cliff’s Notes:

And what’s this? An obscure fact about “protocol relative links” — cool! Http-https transitions and relative URLs, via Simon Willison.

“Guilty Pleasure” movies have been a topic at work of late… two I really like that are not necessarily great movies are Necessary Roughness and Under Siege.

Yes, San Diego Voice and Viewpoint‘s website is still under construction. Yes, it’s sad when newspapers, even niche ones, don’t have websites. What year is it again?

Oh, the thing that powers the avatars on my site and over on Leah’s site is called Gravatar. They got bought by WordPress.

I got the new Cat and Girl book in the mail! See, look, here’s proof I got it: 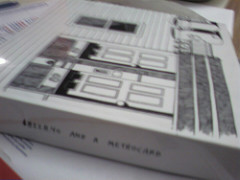 Dave Segovia is reintroducing himself. He’s a heck of a character. Drop by his blog and say “Hi!”

David Foster speaks about a basic question cancer warriors have about why they would get cancer if they did everything right. He’s got the same kind of cancer my Mom has. Here’s a quote:

But they are beating up themselves and their lifestyle for no reason. It is true that some behaviors–like smoking cigarettes–cause cancer. But many–if not most–cancers have nothing to do with how healthily you live your life or how many vegetables you eat or vitamins you take.

And lastly, the estimable Jeffrey Zeldman points to the A List Apart Web Survey Results, which make for some interesting reading.

Have a great weekend!

comics food hip-hop linux movies music webdev
Joe Crawford posted this 15 years ago.
What else did he post in October 2007?
The Date 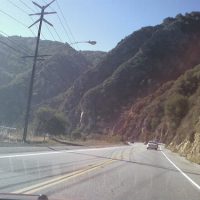