The language in this is not safe for work, but the sentiments are important: How to Irritate and Annoy People in the Name of Blogging

A lot of people I know or know of are blogging about the fires in San Diego: Sassy, JeSais, MAS, MissEwon, Chuck, and Geoff. Also, people I haven’t met: Raph Koster, Cocky Bastard.

Google is changing their PageRank algorithm? is a question/inference the blogosphere is drawing. The working theory is it’s for selling links. They’re diluting PageRank. I’ve had several offers to buy links here on ArtLung.com — and I’ve turned them all down. Typically the link buyers want the links to be permanent, as in, forever and ever. No. I don’t do forever and ever unless you pay me big big big bigtime.

While we fight fires, China launched a lunar probe. In 2001 I posted a story that they’d have a man on the moon by 2005. They didn’t make that, but a moon probe is pretty good. In 2003 I blogged Bruce Sterling’s Wired op-ed on a China-India Space Race.

GIMP 2.4 is out. I’m going to try it out. The interface is not PhotoShoppish enough though. via Paul Slocum of Tree Wave.

Dorothy (of Cat and Girl)’s computer is broken. Sad.

Jason Scott, who was interviewed by Leah and the BBS Documentary, writes about two subjects which make me wax nostalgic for Amiga: Fred Fish’s death, and The Juggler raytraced animation. That animation was truly magic at the time. It was like looking at an alien spacecraft, and there it was for me to study and think about. I never got to render anything, the programming was too inscrutable for me. I did like to mess with DPaint though. Which makes me think about the fact that I’ve been doing computer graphics for 25 years, since I was 13 years old.

Man, I really do like that Endicott song. Seriously.

Be safe out there people. Onward.

3d blogging fire google music san-diego stew
Joe Crawford posted this 15 years ago.
What else did he post in October 2007?
The Date

“Jason Scott, who was interviewed by Leah and the BBS Documentary,”

“Jason Scott, interviewed by Leah, and the director of the BBS Documentary,”

Sadly, I was never interviewed for the BBS Documentary. They totally left me out!

Also, I directed it. 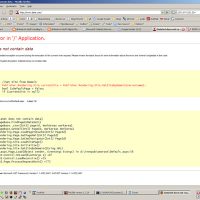