Some Kate Nash for Friday

This week I discovered a show called Never Mind the Buzzcocks (episode list, lucimon84 has current episodes)– a music chat/quiz show from the UK. I found links to a bunch of shows, including ones with Lily Allen and Amy Winehouse. It’s quite British, and I don’t understand all the current references to TV Presenters, Footballers, shows, etc, but the breadth of the music genres and the span of time of pop music makes the show great. They can go from 1950s skiffle, to Elvis, to The Kinks, The Beatles, Reggae, T-Rex, The Prodigy, Beyonce, Red Hot Chili Peppers, Reggaeton — you get the picture. It’s also funny, often dirty, and dry. I have a soft spot for British Comedy of a certain sort — French & Saunders, The Young Ones, The Office.

Anyway, one of the artists mentioned was the name Kate Nash, who I’d never heard of. There was a comment whose context was that she was an artist who is “mockney” — highlighting a middle-class upbringing, but whose accent emphasizes a working class background. I enjoy several songs by Lily Allen, who gets similar criticism, so I thought I’d check out some of Nash’s music, and downloaded some. Turns out, it’s pretty good. I get the same vibe from it as I remember getting the first time I heard The Smiths — this is music that is not meant for me. It’s not pointed at my cultural context. It’s from the UK and belongs there. But somehow, the universality comes through, and despite the strangeness of the accent and the allusions and the word usage, it works. I can’t remember the last time I responded to music this way, but it made me pretty happy. I’ve no idea if this is merely a passing fad, a temporary affectation of my musical taste, but I won’t question it for now.

There’s a fair amount of videos on YouTube of bad cellphone recordings of her music, here are two official videos, and one recording from a performance at the L.A. Amoeba Records just two weeks ago. Strangely, she came to the States for a very brief period, and is back in Europe now.

Mariella (my favorite of her songs so far, it’s got an intensity and eccentricity that moves me):

music videos
Joe Crawford posted this 15 years ago.
What else did he post in February 2008?
The Date

Hi Ellen — I have heard of Jools Holland. I remember him appearing on the old IRS show on MTV, and of course as the pianist in Squeeze, who I’m a big fan of.

Hi there, I read your blog and just thought I comment this time to say I think you might like this guy
http://www.joolsholland.com/ Music not comedy. Maybe you’ve already heard of him? 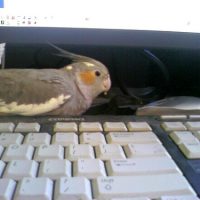 Not Very Helpful, Really
Year of the Rat