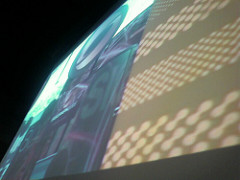 I have some backlog stuff, as per usual. This weekend to catch up? I hope so.

Last night I went to the SIGGRAPH Los Angeles event held at the EA facility in Marina del Rey. Devon was supposed to attend with me but he ended up distracted by girlfriend. The Electronic Arts building, or rather set of buildings, was very nice — they had a little arcade, and a gym, basketball courts, and security all around. It actually reminded me a bit of the franchulates from Snow Crash, how hermetically sealed up from the rest of the community the place was.

The topic was digital acting. In brief, it examined the challenges of creating digital, directable animated charaters, in both linear media and in games. The emphasis on artificial intelligence was a bit of a surprise, I hadn’t thought about how much behavior gives a sense of “reality” to the world. And behavior is inevitably complex and hard to model. It was fascinating stuff and had me thinking about the challenges of making NPC (non-player characters) in a game.

I’ve been attending SIGGRAPH events in various places since the 1990s. In the presentations folks would indicate when their “first SIGGRAPH” was. Not that you’re interested, but mine was in 1995. On the nametag (which I still have) I wrote my occupation as “FILM/COMPUTER GRAPHICS STUDENT.” Mind you I was only toying with the web at the time as a consumer. I was learning PhotoShop and taking classes at UCLA Extension at the time. Out of all that curiosity about how computer graphics were done in movies, science fiction, computers, programming — I ended up in the web. And the rest, is history.

Even though my day to day life has gone more toward code and less toward graphics, I’ve kept up with local chapters of SIGGRAPH ever since that first SIGGRAPH.

Next month the topic is Automobile Visualization, and I wonder if my buddy Chris might want to attend that one.

The drive home was nice. I drove PCH. The big wide ocean is so large and so dark at night. The crescent moon shone down on it. I listened to danah boyd on an audio podcast from Harvard which had my mind racing over many topics.

There is an interesting intersection between games and social media and I’m not sure what that ends up looking like.

games graphics
Joe Crawford posted this 14 years ago.
What else did he post in March 2008?
The Date

aaaahhh the early days… remember when…
funny how things change. “Curiosity is the very basis of education and if you tell me that curiosity killed the cat, I say only the cat died nobly.” ~Arnold Edinborough (Canadian writer)