On My Mind Now

If I were to try to try and describe the contents of my brain, I think the simile I’d use would be that it’s like the tornado in The Wizard of Oz, with a swirling mass of items rotating around in it — a messy mass.

But that tornado does move the plot along rather well.

It’s been hot here in Moorpark, very hot. This is rather inconvenient for us because our central air conditioning broke down over a week ago. We’re using a backup system of every-room-gets-a-fan and take-it-easy-during-the-day. The landlord is working on this issue for us. I’m hoping that we get a new AC unit soon, though it sounds like in the meantime they’re going to replace the compressor.

Also on the home care front, we have ants. On Sunday we had a full scale invasion in one part of the kitchen. We dealt with that one, regrouped vulnerable foodstuffs, placed the Grant’s traps, and we were good. They came back somewhat, and on Monday night we placed some foundation chemicals around the perimeter where the ants have been originating. They came back, escaping our chemicals by choosing to go up walls and along the ceiling before coming down toward the main kitchen area. I find this rather innovative, but I don’t have enough admiration to let them be. So this is how last night I ended up mounting some of the traps along the ceiling. 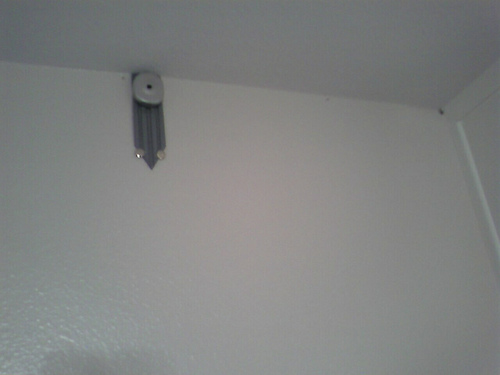 Also on the home front, Devon, oldest of the four kids at age 19, has moved in with us temporarily before he moves in with some buddies in July. It’s a rather nice surprise to have one of the kids with us 100% of the time. He also has two baby feline companions with him, which is really the reason he’s here. They were banned from his Dad’s house, so here we are. I was a bit worried about him earlier this year, but he seems to be getting it together rather nicely and I’m proud of his progress toward adulthood.

Work is busy, and complex, and good. I don’t really want to say more than that at this point. My contract will be up at the very end of July and I’m not sure what I will do next.

Financially things are going well. We had that hiccup about getting paid earlier this month, but at the moment we’re where I want us to be. We always could be doing better, but this very month we retired two smaller (one less than $1K, one for $3k) two debts. Retiring a debt is always a great thing. The IRS debt looms largest, because they are the dog with the most menacing teeth, but for now we’re paying nice and regularly and we’re on track to be ahead of the game for 2008’s taxes as well. Just barely, but we will be there. That’s rather exciting for me. Obviously life will intrude on such declarations, but I think even if Murphy’s Law visits us, our emergency fund is there for such things. We’re still on “step 2” of Dave Ramsey’s Baby Steps.

Strange as it may seem, the most profound spiritual sustenance I get these days are in listening to Dave Ramsey, swimming, and looking at the ocean. I also have embraced some of my more theistic attributes in quieter ways, though talking about it here may not be something I’m ready to do. I’ll leave it at that.

Ramsey is a very smart communicator, and his experiences (getting rich, going bankrupt, getting rich again) give him the kind of wisdom I respond to well — hard won intelligence and compassion. Had you told me that I would enjoy the financial radio show (I listen to the free podcast) of a Christian Evangelical Conservative I would not have believed you. But the Baby Steps make good sense. Whenever he talks politics or government I disagree, unless he’s saying “don’t look to Washington or the Presidential candidates to solve your problems” which I agree with. I think he ignores the public works projects this country has done which have done good. But no matter, what he’s best at is talking to real people — single parents, twenty- and thirtysomethings, young marrieds, middle-agers, retirees — and helping them deal with good and bad decisions to help give them financial peace. The short version is that debt is almost always a poor choice. The only debt he likes, and only begrudgingly, is a mortgage for a home — and only if you can put down a big down payment and get a 15 year fixed mortgage. All other debt – credit cards, car loans, student loans, borrowing for a business, borrowing from family, are bad. When people call in with trouble and confusion asking “why am I not able to make ends meet” he’s able to turn that call into an opportunity to dissect what’s not working in broad strokes and give practical advice. It’s rather marvelous. Some people’s problems are relatively easy — bought a car you can’t afford, get rid of it — but for some it’s a layoff and health problems compounded with an adjustable rate mortgage that has kicked in bad. He is able, somehow, to deftly advise these folks to get traction on their finances. In the most desperate situations, he tells people how to prioritize what they can do — yes pay rent, utilities and food, no, don’t pay that stupid credit card, yes sell the car. Yes, not paying your credit card will ruin your credit, but that’s where you are anyway, so you have to get your income up and run your money, rather than letting your money run you.

When I think about how long I let my money run me, not being proactive about the decisions I took, I get a little shocked by how ignorant I was in the ways of money. Budget? What’s that? Financial future? What’s that? But I must say, Ramsey put it all together for me as I got my life back together.

I didn’t mean this post to get so financial, but it’s what’s on my mind now.

Time to get to work. Remote today. Have a great day.

ants family money weather
Joe Crawford posted this 14 years ago.
What else did he post in June 2008?
The Date

My Sister Is Beautiful
Around the Web