Last week I did some work importing the Words section of my site into WordPress.

I pulled all that ephemera in as pages.

I also found a stub of an essay I never finished.

The preamble on the page said:

People keep asking me about my evolving spirituality. This page is for that. Expect it to be unfinished for a long time.

I didn’t do anything with it for 18 years. I forgot it was there. I didn’t link to it from anywhere. A little truffle buried in the dirt.

I may have shared it with people in email. But I can’t remember.

It’s startling to read my own writing about my mother in the present tense. She is now in the past.

grandmother (father’s side) converted to catholicism, 1950/60s.
grandparents on mother’s side relatively religious.

mother very strong catholic. many stages to her life. often refers to prayer
in conversation, but manages to not be a jerk about it. caring, giving person.

father very strong vietnam veteran. cynical about human motives and thinking.
most people are sheep, going along for the ride.
he simply sees himself as realistic. nevertheless, he is convinced of a grand
design of universe. is not an athiest.

st. benedict, patron saint of artisans. he was a monk
who lived in a cave. i liked that idea.

1980s. learn about Deists from my father.

1980s. arguments with grandmother about evolution and social justice.
strongly believe that the role of the church is to promote change.

1980s. father points out to me something along the lines of “well the catholic
church is not perfect, but when there’s a fight for justice, as in the civil
rights movement, you see priests out there. they must be getting at least some
of it right.”

1990s. worked in healthcare. waited for the miraculous.
human beings are mortal.
no infinite promise.
the body dies and there is no magic.

1993. learn of “jefferson bible” – the new testament, stripped of all
trappings of religious life.

1995. learn more about the many mistakes, rewrites, apocrypha in the bible.
alarmed by it all.

1993-5. basically give up on organized religion. along with it, faith.

mid-late 1990s. more reading makes more skepticism. embracing atheism.
atheism does not explain it all. worse, athiests i meet are as evangelical
as the christian evangelicals i meet.

2002-2003. appreciating the things that are not reproducible and measurable.
love. friendship. trust. these are not scientific. but i believe in these.

2002. aunt says to me “despite your beliefs, i can see very well the light
coming through you.”

2003. wrestle with possibility of being a godfather. understand that i do not
meet the criteria.

These years later I appreciate the role of religion when it is positive in people’s lives, and also that we choose all sorts of things to serve in a religious ways. I know for me going to the beach is not unlike going to Church. I’d also say that being in 12-step groups over the years the utility of the notion of a higher power is a good exercise. And a higher power can be nearly anything.

I’m not sure this is much of a post, but I’ll leave it there.

religion
Joe Crawford posted this 1 year ago.
What else did he post in November 2021?
The Date 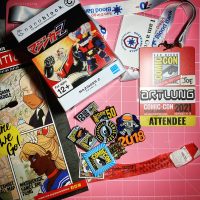 Comic Con Special Edition was a new, different, interesting thing. I had fun.
Kelly and I at SDCCSE! Looking forward with hope and trepidation to July! 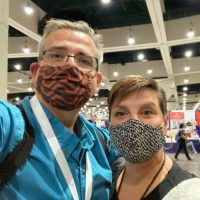