Slightly improved from the version I emailed my Mom, who will now be taking care of Bas:

Bas is *very friendly* – he will jump in your lap and purr if you let him. Bas loves everyone, but he will leave some hair on you in the process.

Bas is declawed in the front; he still has claws in the back. He’s about three years old.

He has no regular food time, we keep his dish semi-full. If we leave for few days he is *so* talkative when we get home, meowing and meowing. Then he munches.

Toys: His absolute favorite toy is the transparent cap from a water bottle. He *loves* batting them around, carrying them around. One pitfall of this hard-to-see toy is that they hurt when stepped on. So be alert!

Sleep: His typical pattern for a while was to sleep with Leah and I. When we are waking up, he wants to know there’s food. If he’s out of food or water, he’ll let you know. If he’s out of fresh water, he will go search for it. We try to keep him out of the toilet 🙂 Generally refilling his water dish at the beginning and end of the day takes care of his hydration.

Food: Bas likes to paw at his food – he sort of pushes it out of his dish before chowing. Kind of a peciliar habit, really. He eats IAMS Original Adult 3+ — we just give him the dry stuff and he does fine. For a while we were trying the Fancy Feast ones for a taste treat sometimes. He seemed to enjoy the ones with gravy. He was not crazy about seafood. He does come running whenever have tuna though. He doesn’t *require* wet food though.

He is sometimes a moocher. Even if he doesn’t really *want* what you have, he wants to check it out. The key is to be firm with him and say “no” when you don’t want him doing this, you also may have to push him away. He will sulk a little when rebuffed like this, but he gets over it. He has eaten little bits of food from us — I think he once had some asparagus! He will mooch butter and cheese. He also likes turkey, chicken, beef. Bas is definitely a carnivore. 🙂

Litter: he keeps himself pretty clean, really. He doesn’t have a favorite kitty litter that we can tell. We try and find an inexpensive one and that has worked fine so far. His boxes to this point have all been covered style, like a little doghouse. I don’t know if he would do well with an open one. I suppose he could, but we’ve not tried it. We’ve been moving him around so much he adjusted really fast to this house. I hope he can adjust as fast to your place. 🙂 The key thing is just to make sure he knows where his food and water are, where the box is, and make sure he can get there. Given these, he does fine.

Snuggling: When it’s chilly he will snuggle! He loves that and purrs like mad. Like I said, very friendly. He’s I guess a medium-length haired cat, but beware, he does shed. I think the cold climate there (and the temperature the house is usually kept at) will mitigate this pretty well.

Coming when called: Even when there’s no reward or food involved, he will more or less come when called. “Bas” is short for Basilone (we say “bass -ill – OH – nee”, named after the exit off the 5 Freeway in San Onofre/SanClemente where we actually got him. We got him from a guy who was moving into an apartment which could not take pets. Basilone Road is named for John Basilone, a Medal of Honor winning Marine from WWII (we learned this after we named him, we just thought the name was nice). When we got him he had a dumb name, something like tigger or tiger or something. 🙂

He is spayed, and in good health. He got current shots last week, and that reciept came with him. Given that he has the no front claws, we strongly suggest he stay an indoor cat. The vet said that as a decalwed declawed cat, he has no defenses. He has gone outside, on accident (pushing out screens, sometimes in the middle of the night!) — but these were old weak screens. He survived, and even had fun, but he did get dusty and dirty. He has not encountered many other cats, and the one time we had a “friendly” kitten stray come in (during our last party at the 21st Street house) he was MOST hostile to the mere idea of having another cat in the house. Interloper! When he sees cats outside the home he basically is fascinated and reticent. I think he would not do so hot up against a mean cat.

Night time crazies: Occasionally, Bas will get “the crazies” in the middle of the night. He runs around the house loudly. If the noise of a cat running around would bother you, or if he’s jumping on you, putting him out of the room should do it. I know you guys sleep with a fan so maybe the noise would not be a factor. But if it did — well, holing him up in a room would work. When we were staying in Burbank the solution we came up with was to put him in his carrier with the bed in it. We did this when we went to sleep. Then we put the carrier in the bathroom (the tub, actually). When we got up, we’d let him out. He was just as happy and snuggly as ever, and did not punish us for putting him in his carrier overnight. This put him on a pretty good schedule, and kept him from being too much of a late night cat.

basilone cat
Joe Crawford posted this 17 years ago.
What else did he post in April 2005?
The Date 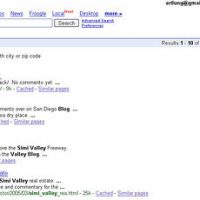